Book Review: The Hovercraft. A history by Ashley Hollebone 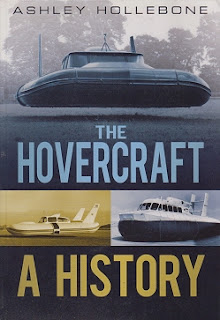 Unusual forms of transport fascinate me. When that involves a machine that was once seen as "the future", it's even more appealing. Because of this, I love hovercraft.

Ashley Hollebone also loves hovercraft. Unlike me, he's done more than take a day trip on one, he re-built a personal hovercraft (Starbreeze RX-2000) and then wrote a book on their history.

The books is more comprehensive than anything I've read before. Starting with the very early days and Christopher Cockerell, we progress through the SRN-1 and its first crossing of the English Channel right up the present day.

Along the way there are rather more manufacturers on the scene than you might expect. I'd never heard of Cushioncraft for example, but as the cover shows, they produced some fantastic looking machines. Some were not a million miles away from the Star Wars land speeder seen back in 1977. I wonder if they were any influence on the design?

Technical fans will enjoy the chapter on how a hovercraft works, not just the "blow air out of the bottom and it floats bit" but the way that this is carried out in a sophisticated way so the craft rises in a controlled manner. It turns out that while a skirt might make a hovercraft more efficient, it isn't essential. Should you feel the urge to add one though, it's far more than a simple curtain around the edge of your platform.

Hovercraft, like faster than sound passenger flight are possibly one of those technologies whose time has been and gone. The wonderful giant SRN4 craft are no more than museum pieces now. The service to and from the Isle of Wight still runs, but there is a lot of pressure to build a fixed link to the island which would surely kill it.

For the moment, the future is with military service. Cost is secondary to speed and maneuverability here so there is a real advantage in moving men and machines on a cushion of air.

The text is very readable, this is a page-turner. Better still, plenty of photos illustrate many of the points as you go along. There were places I felt could have benefited from more pictures and others where the photo could have been in a more appropriate chapter, but nothing major.

The main criticism of the book is that it tries to cover too much. Maglevs are NOT hovercraft to my mind and neither are ground effect vessels. Yes, they float and don't fly, but to me, if it doesn't blow air then it's not a hovercraft. I'm happy that the French Aerotrain makes it in, but we get next to nothing on the British Hovertrain.

Oddly, the chapter on rescue craft ignores the RNLI hovercraft but these them pop up in the Griffon Hoverwork chapter at the end.

These are niggles though. This book did its job of inspiring me to want to know more. Not because there was anything missing, but because it sparked my enthusiasm for more pictures and videos of interesting and obscure craft. Rather a lot of my time recently has been spend on the web performing searches for things I've just read about.

Buy The Hovercraft. A History from Amazon. Or do what I did and borrow a copy from your local library.
Posted by Phil Parker at 5:30 AM

From the NY Times 1971:
It is based on two inventions: the peripheral jet air cushion, which gives the vehicle support and guidance and the linear electric motor, which provides propulsion and braking. Both were pioneered in Britain.

The propulsion motor is almost silent. Most of the noise there is comes from the fans that generate the air cushion. On the prototype vehicle these fans have not been silenced, so that noise sources can be located and progressive noise reduction carried out.

Tracked Hovercraft was established in 1967 as a subsid iary of the National Research Development Corporation, Govenment body set up to develop and exploit inventions in the publid interest. The Government has invested $12‐million in the project.

On‐track trials began in early November, and the developers expect the hovertrain to reach speeds of 80 to 100 miles an hour within a few months.

There was a report on BBC Look East last night that the original unit is being restored ;
https://www.facebook.com/pg/bbclookeast/videos/

Thanks Neil. Interesting video. I have a feeling that Maglevs for long distancers are one of those technologies that LOOK like the future but don't actually offer any advantages over normal rail and quite a lot of disadvantages. I imagine that those who hate HS2 would have a field day moaning about the great big concrete beams required for Hovertrain!