All the gear, no idea 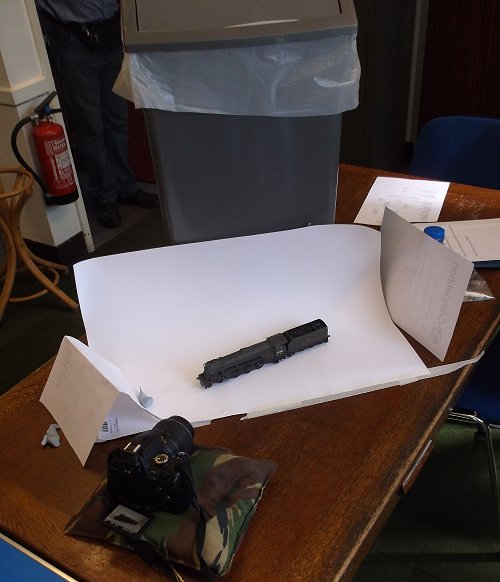 At a recent show, I suddenly noticed that  the hall had got a loot brighter, and the "sun" was coming from behind me. Turning around, I was momentarily blinded by an mass of LEDs while someone took photographs of a layout.

This struck me as odd. I've been on plenty of magazine layout shoots and never seen a light as bright as the one being used. Even in the days of photo floods, there was less illumination. They weren't pointed across the hall at about 5ft above the ground either.

I'm not an expert photographer, but I manage all right, and I have had the benefit of meeting plenty of people who are experts. As a general rule, if the layout's own lighting is OK, they use that. Quite a lot of the time, a long exposure will sort things, no need to bring in a portable sun.

If you are using an SLR mounted on a tripod, there is even less excuse, although, as I've pointed out recently, something more modest is often more than adequate unless you feel the need to impress your mates at the camera club by boasting about the size of your lenses.

Here's the setup I used for photographing the DOGA competition entries.

The background is a sheet of white card fixed to a handy bin to form a curve. At one end, paper blocks any stray direct light from a window. At the other, white card bounces light into the "face" of the locos.

Light comes from above, fluorescent strips, and from one side through the windows.

Camera is a Nikon D5000 sat on a beanbag. I'd have preferred a G12 but on balance I decided that although it cost more, if the SLR was nicked or damaged, I'd be less worried that the same happening to my only G12.

Several exposures were taken each time and the results stacked for full depth-of -field. It's time consuming but the results are worth it. Or at least I'm happy:

Email ThisBlogThis!Share to TwitterShare to FacebookShare to Pinterest
Labels: photography

Oh, Phil, this is my pet hate at exhibitions, some of these camera flashes are so bright these days you can't see anything for half an hour after they have gone off. Don't get me wrong, I feel honoured when someone wants to photograph my layout but if you have to use a flash please consider us behind the layout and just ask. I have never used a flash, I use the B setting and paint the photograph with light