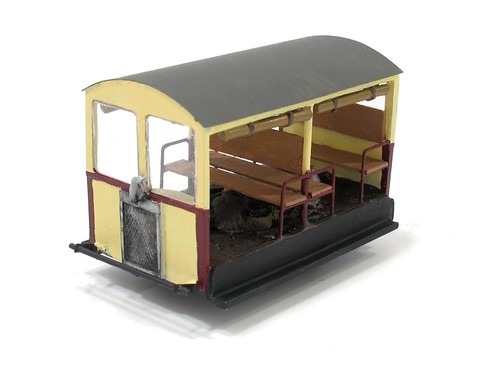 ON and off, I've been carrying on with the Wickham Trolley last mentioned here an embarrassingly long time ago.

Most of the effort has gone into painting the model. A bit of a challenge because it's a bit of a weird choice of prototype. I'd originally thought it would be running on Ramsay pier, but then realised that the floor is covered with rather nice detail, all of which shouldn't be there if it's carrying tourists from a ship.

So, now I think it was running on the pier, hence the fancy paint, but has since returned to the MER where the crews have been dumping stuff under the seats.

Yes I know this is contrived, I'm doing my best.

After painting, glazing with Bayer Extrudierte Copolyesterplatten fixed with Deluxe glue'n'glaze. The Bayer stuff is incredibly clear, far better than perpex but without the issues of glass.

So, job done. A bit of a silk purse from a sows ear if I'm honest but the finished model looks OK. Now all I need to do is built a 7mm scale Isle of Man to go with it!