According to MRJ, "The emphasis of the show is very much on modelling and the creative side of the hobby, and layouts, traders and demonstrators has been selected with that in mind"

I thought it sounded a bit pretentious.

By Railex, there seemed to be a lot of interest with organisers starting to get concerned the numbers through the door might be several times the 350 they hoped for. Shades of the old MRJ show with a queue around the block maybe with unhappy punters stewing in their tweed. 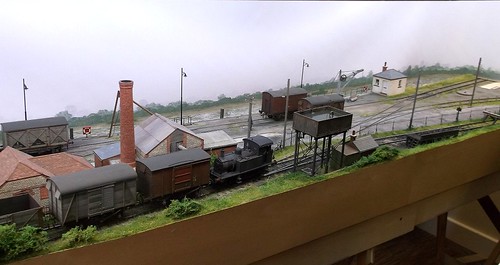 The big draw was to be the first showing of Arun Quay, Gordon and Maggie Gravett's follow up to the excellent Pempoul and the latest in a series of high-quality models railways. We'd seen a few photos in print and now it was time to see the real thing in the plaster.

We weren't disappointed. While a very modest size, the quality of workmanship is superb and more importantly, the atmosphere is spot on. A way of being completely finished, we were able to marvel at the lovely buildings and scenery. I'd love to be able to sculpt walls as good as these. Maybe one day, with a lot of practise, I will. 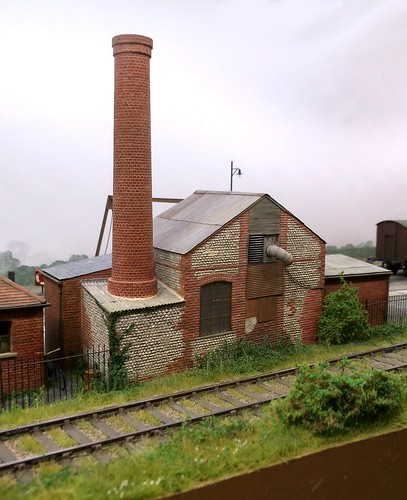 All this fuss of course, could have overshadowed the other models on show. Warminster is basically a very high quality small-town show. I mean this in the nicest sense - everyone was very friendly and chatty for a start. I talked to most of the layout builders and came away with some inspirational ideas for a start. Things to try in the future.

Just as importantly, there was cake and lots of it. Thanks to sharing a car park with Morrison's, there was no need to cater for meals, just refreshments. That's good as the hall isn't huge and loads of modellers sitting around chomping would have cramped the layout space. I can report that both carrot and chocolate cake were as high a quality as the layouts on display. 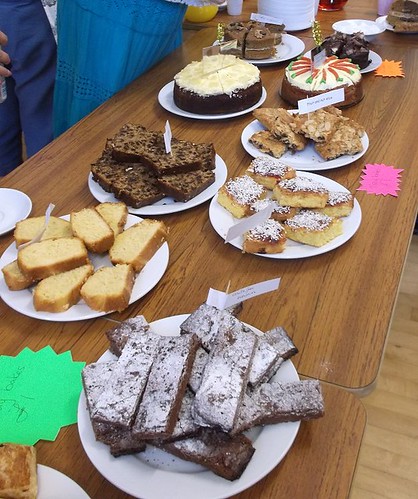 Weirdly, on returning from lunch, the numbers in the hall had grown rather than thinned as normally happens. This was a bit of a nuisance as my father and I had been banking on this to give us space to get to some of the exhibits.

Fortunately, the predicted numbers didn't arrive. I'd guess the figure was closer to the organisers hopes. It was generally easy to walk around and despite temperatures approaching 30 degrees, not unpleasant thanks to the lack of smelly people. Those who did make the trip enjoyed themselves simply because everything was so good. 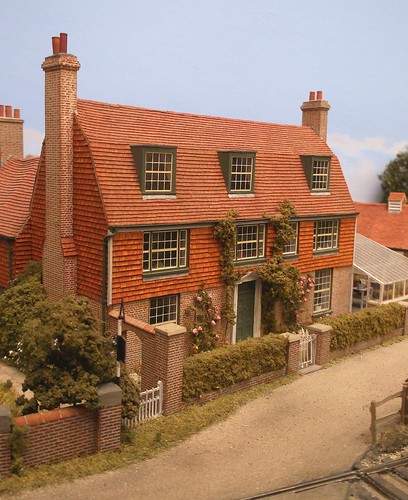 Tradewise, the "pre-loved" stall was both varied and reasonably priced. A single RTR seller was plenty as was one book seller. There was scenery, DCC and kits and motors. All very much fitting the ethos of the exhibition.

Maybe the MRJ advert was a bit pretentious, but the event itself certainly delivered everything promised. If you wanted to meet the stars of the finescale world and see a selection of absolutely cracking layouts, then this is a show you should have been at.

I know people are twisting arms to say this should be an annual event. If it does go that way, keeping the standards high will be tough. Maybe it should be a one-off so those of us who did go can bore people endlessly by reminiscing about such a legendary event for years to come...

On Tuesday I'll go buy the latest issue of Model Railroader and I'll be lucky to find one layout — or even a photo — half as interesting as those you've shown here. And that's including the cakes!
Would you mind if I shared your site and some of these photos, with attribution, with my friends on Facebook?

Share away, although I'd love a link back to the blog.

I suspect this might be a UK thing. Without the huge spaces available to US modellers, we've adopted a different style of layout. The scene is also dominated by exhibitions where the layouts travel to shows - again, something to do with the different geography as we can travel from one end of the country to the other reasonably easily.

Good points, but I still hope a lot of my friends will enjoy them. Even those not particularly into model railroads/railways might like the cool buildings.
Most of my friends who have trains have big round-and-rounds. They've never been exposed to anything else. But I grew up across from the Virginian Railway's big coal marshaling yard (Elmore), so I watched and loved the trains moving slowly, back and forth. When I started playing with trains, from early on I prided myself on how SLOWLY I could make them move, not how fast they would go. So naturally I bored some people to death. I actually had an Inglenook back in the day. I didn't know it had a name!
Now, with limited space and funds, I'm building a 12 x 1. I always planned to build a small branch line terminus, and when I saw John Flann's wonderful layout in Model Railway Planning, that led me to BRM and to Edgeworth. I was going to build my Americanized version of it, but decided I needed a few more sidings and operation. Now I'm building a version of Ron North's wonderful Halland layout, with some small differences.
And, yes, one day when I get some bills paid off, I will have me a Brit OO layout on the side. Maybe even Edgeworth for starters.
Thanks for being an inspiration!