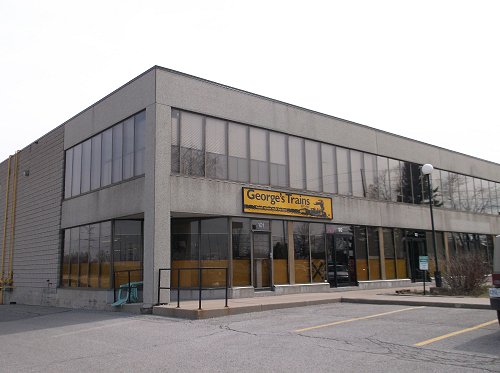 Handily situated for both the back of the Rapido Trains office and a main line real railway is George's Trains, which describes itself as "Canada's Greatest ModelTrain store!".

The shop is pretty sizable compared to many UK stores but not mahoosive. The first thing that struck me was the amount of O gauge 3-rail on sale. This is very popular in the US, far more than finescale it appears. Quite a few of the working Lionel sets were on sale in pre-owned form, but fortunately (for my wallet) not the giraffe car.

Moving through a short connecting corridor we find the magazine section which could rival the railway section in WH Smith, but with Canadian and American magazines. On the walls are some "classic" old boxes. 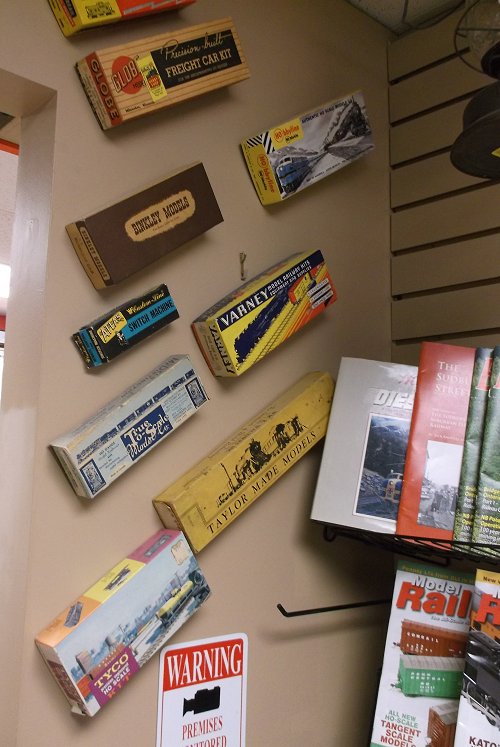 The second half of the shop is HO rolling stock and kits plus some N. Great range of building kits and also scratch building bits. Far too much for me to remember or even properly take in on one visit. Moving back toward the front, it's paint (no Humbrol), glue and other materials.

There's also a cabinet full of Korean brass models, probably more in one place than I've seen in my life. They look very impressive, but against modern RTR? Probably more a collectors thing now.

Obviously, I couldn't come away empty handed so as well as a building kit and HO scale Yeti, I bought the most horrible thing I could see packed in one of the shops own bags - it's an O scale plastic car that I wouldn't let near a layout, even a tinplate one. But it only cost $3.95 - £2.27 at time of writing. 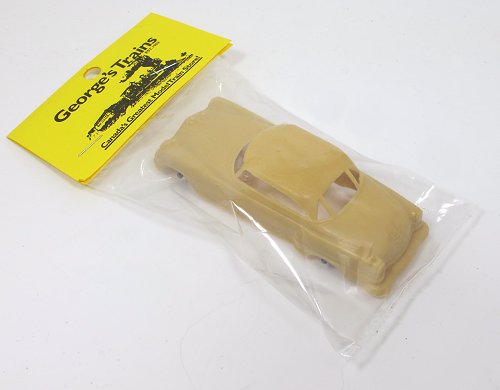 It makes a nice souvenir though of my trip.

A final point, I understand this is where Rod Stewart drops in when he's in town for a gig, so you never know who you might bump in to.

George's Trains website.
Posted by Phil Parker at 5:30 AM

That car body- are there any more available? They would make a great starting point for low-cost vehicles for 28mm tabletop games.

I don't think I had the only one - you'll need to contact the store though to find out more. I'm a long way away now!

I take it then that your next O gauge layout won't include a few custom car enthusiasts meeting up in a carpark?