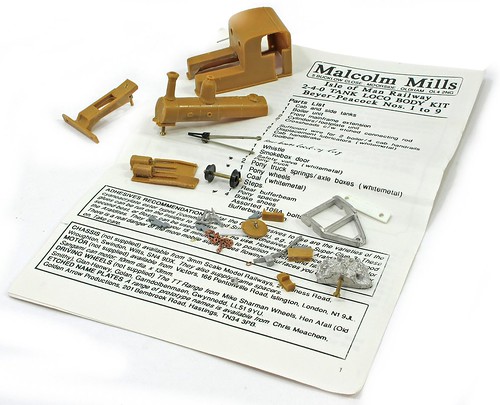 How did this happen? An Isle of Man loco kit I'd never heard of?

Found in among some second-hand goodies for sale at the Groudle Glen Railway a few weeks ago, I snapped it up for a tenner just to know more about it.

Back home, looking inside the bag, I find a plastic boiler unit along with side tanks and cab from the same material. There's a frame front and cylinders too plus sundry other parts, many cast in whitemetal.

There's no chassis, but this could be ordered from 3SMR - although it's no longer on their website. I guess the Branchlines version could be used though.

Compared to the GEM whitemetal kit, the body is a bit basic. I'd say it covers the early small boiler locos rather than the middle versions in use nowadays. For the moment, this will remain a curiosity on the collection, there are enough white metal models awaiting building for anything Manx I might require.

Of course, Malcolm Mills is still producing models - his website is here - but now it's very reasonably priced O and G1 engines. I dropped him a line to find out more about the kits - apparently, there was a Caledonia as well as a Peacock. Sadly, they made no money when produced 25 years ago so he moved on to the larger scale models which have been much more successful.
Posted by Phil Parker at 5:30 AM