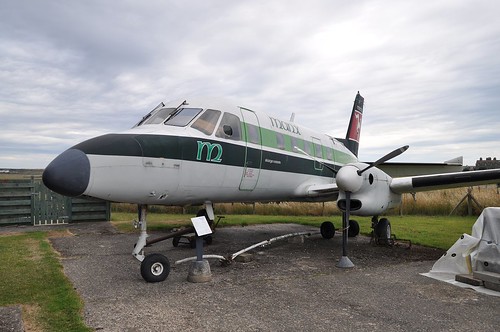 Down beside Ronaldsway airport, is the Manx Aviation and Military Museum.

Housed in a couple of large and interconnected Nissen huts, at first glance the place doesn't look that big, but once inside, Tardis-like, there's loads to see.

Now, I'll admit that military stuff leaves me cold. Worse, there is a lot of WW1 detail and that I really don't like. The number of memorial plaques in cabinets attests to the pointless slaughter of this conflict and all the time I'm thinking that if I'd been born a hundred years ago, that would have been me. Don't get me wrong, I have nothing but admiration for those involved at the sharp end and the exhibits are well staged. It's just that I feel uncomfortable.

Elsewhere, there is a nice civil airlines display which appealed far more as my first flight was with  Manx Airlines in the days when you got fed in the 45-minute flight. They cover other airlines that have served the island too.

Some of the display is given over to RAF training, the north of the island carried out a lot of this as the area was considered safe from German aircraft. Not safe for the crews themselves though as the first thing you see is a map showing crash sights. I know how low the cloud can get and sadly a lot of pilots didn't find out about the mountains until the bumped into them.

In one section there is a restored Bofors gun on its carrier and the information on its history and restoration is interesting and impressive.

Overall, if military stuff is your bag, then this is an excellent museum and well worth a visit. It's free to go in and even has a shop selling a really wide range of aircraft plastic kits.

Email ThisBlogThis!Share to TwitterShare to FacebookShare to Pinterest
Labels: aircraft, isle of man

I'm with you on the WW1 themes Phil, especially with the course the UK is taking at the moment. I found it difficult as a teenager when I lived in the UK and I can't imagine how much worse it's got since.

I know exactly where you're coming from with regard to "military" stuff - in museums and elsewhere.

To be honest, a few years back, I also found all those Hercules flights into Brize Norton (and the accompanying "repatriation" ceremonies) rather distressing - a visible sign of people who'd agreed to risk life and limb on behalf of this country (or whatever) having their lives violently stolen from them.


Of course, during a number of previous conflicts, their predecessors hadn't even been allowed to choose to enlist - they'd been ordered to, often by "governments" that they'd never been allowed to vote into (or out of) office.

They'd been sent into battle - often ill-prepared and ill-equipped - frequently in suicide missions - written off and condemned as mere "cannon fodder" - pawns in someone else's game of chess.

Of course, for these guys, it was no game - far from it, in fact. They paid the ultimate price - their lives - snuffed out at the barrel of a machine gun - drowned in the icy waters of the North Atlantic - suffocated by poison gas - blasted away from them by explosives - or torn away from them as a bayonet chewed a twisted path through their chests.

Let's face it - war is never a pleasant business.


So how do I react when I come across a military museum? I've also got the utmost respect for people who've risked everything for their country - and the future and liberty of its people - whether they chose to take this risk, or whether they were ordered to enlist.

As an engineer, I'm fascinated by the technology on display - the solutions to technical problems - but this is a terrifying fascination. I wish all this stuff had never been "needed" - I certainly wish none of it had ever been used "in anger".


I also see the exhibits - in museums like the Imperial War Museum, the National Army Museum, the National Maritime Museum and the RAF Museums - as memorials to the people who never returned from these conflicts - or those who did return, as broken, often disabled, shadows of their former selves.

I could make similar comments about various regimental museums.

Ultimately, I see all these places (and their exhibits) in a similar way - as memorials - and warnings from history, which current and future generations hopefully don't ignore.

This is why I take any opportunity to visit these places - but I also wish they'd never been needed.