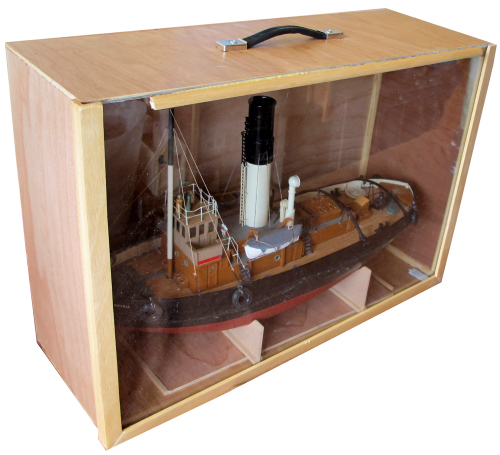 I've never understood why anyone would devote hundreds of hours to building a model boat and then carry it around under their arm. One modeller arrived at a show with his whaler in bits because, in transit, a car seat had flapped down and crushed one end of it - he reckoned on at least 50 hours to sort out the mess. 50 dispiriting hours or repairs rather than making new things.

At the end of the same who, modellers rushed out to their cars, mostly with boats that would be loaded up and then have stuff packed around them to (hopefully) avoid the vessel moving around.

My Dad is in charge of making boxes for all our boats. The design has changed a little over the years as this early version with a hinged front shows and now has been simplified to include a sliding front. All the wood is cut to size by our local hardware shop and simply has to be nailed together. The sliding bits are L-shaped mouldings chopped up on a cheap mitre saw.

A recent innovation has seen the front panel, previously a piece of plywood, replaced with clear plastic. It doesn't warp as the wood often does when varnished, and more importantly, allows us to see the model inside. When you have a fleet as large are ours, that is a useful feature!

The box also becomes a display case rather than just a container.

Varnishing takes longer than building, and both take a lot less time than making the contents.
Posted by Phil Parker at 5:30 AM