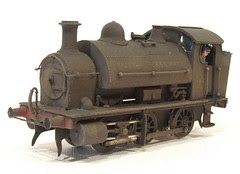 OK, so the blog has been a bit behind. Yesterday this model locomotive was ready for paint, now it's done. This wasn't down to an overnight miracle, just my writing catching up.

The primer coat looked pretty good when applied. There were a few small areas that needed a touch of filler but nothing much. I did plan a pretty heavy weathering job so the finished didn't need to be perfect.

When I went for the black paint my Humbrol tin was beyond saving but I found a pot of Railmatch coal black. I don't remember buying this but as it was on the shelf and liquid (one I broke into the bottle - the cap had sealed itself on and needed pliers to remove) I decided to experiment.

The paint sprayed OK, perhaps a little less thinners were needed than normal but there wasn't much in it. Coverage was excellent and the finish OK once I'd built up enough depth of colour. Coal black is slightly glossy - I hoped this would let the decals sit better than on a matt surface.

Transfers were a mixed bag from my transfers stocks. I think the "British Railways" are waterslide and the numbers Presfix. The loco actually ran with its GWR numberplates so one day I'll get hold of a set but for the minute, this will do. 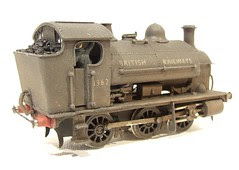 Finally the model saw a lot of thinned dirty colours. First up was rust which went well right up until the end of the paint cup and then nearly all the pigment shot out over the front. Spraying thinners on didn't diminish the effect but it wasn't entirely unrealistic and subsequent coats of dark brown and grey hid the problem. I even blew a coal black/grey mix along the top to give a smoke residue. The real locomotive was absolutely filty as far as I can tell from photographs. Since it's only a Great Western Railway engine, I didn't think the crew would bother cleaning it much either. :-)

If there is a problem it's that the paint dried very quickly and leaves a slightly textured effect which is probably more appropriate to a 7mm scale model rather than 4mm. Perhaps this is an area where enamel rather than cellulose thinners would be better. The later flash off so fast, which is why I use them, that the paint doesn't get change to spread.

Anyway, glazing (Krystal Klear) a crew (Langley) and some coal (from the coal merchant) in the bunker finished the job.

The end result looks pretty good to me. If you compare it to the original as I bought it, then the work has made a big improvement. After some careful lubrication and a session on the rolling road I've ended up with a nice runner too. In fact at least half an hour was spent later yesterday evening just running the model back on forth on my metre long test track for the satisfaction doing this gives. I look forward to pressing this locomotive into use on the layout.