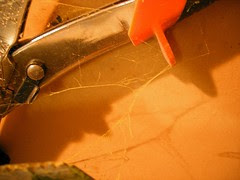 cobwebs
Originally uploaded by Phil_Parker.
With the Slingshot season approaching I'm painting my Dad's boat as he's going to have a go. The last time he tried anything like this was in the 1960's with slot cars. Apparently slot racing was big then - clubs scratchbuilt huge circuits and then converted 1/32nd Airfix kits to run on them.

Anyway, his racing colours were royal blue with a yellow nose so that's how he want his boat painted.

The yellow will be a fluorescent colour that I've used before. Sprayed over a matt yellow base it took an age to get a decent colour depth. The paint from Revell has to be dried as you use it or runs happen.

It's awful stuff to spray and weirdly produces fluorescent cobwebs over everything in the garage. I think this isn't a conventional paint but a sort of plastic. It's certainly has more in common with jelly than paint.
Posted by Phil Parker at 5:34 PM