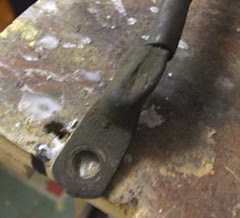 lead end
Originally uploaded by Phil_Parker.
For a while now the van battery has had to be left disconnected when not in use or it runs down. I'd assumed a slight short and planned to take a look eventually. For the time being a set of quick disconnects on the leads made things pretty quick and easy so it wasn't high on my list of things to do during the cold, wet, winter.

Last weeks snow made things dramatically worse though. The battery appeared to die. I recharged it but that didn't help. I had only 8v on the cab voltmeter. So I charged it again and it made no difference.

A check with the voltmeter on the battery showed I have nearly 12v at the back of the van so there was something wrong en route. My money was on the main lead from batter to starter motor which I knew had chafed in the past. After just a little bit of contortionism I managed to remove this and tried to get a replacement.

Here's the rub - the nearest thing I can buy at Halfords is a 30 inch long positive lead. I need 36 inches. Guess who gets to search the motor factors (FLAPS) this week for a longer lead ?
Posted by Phil Parker at 2:41 PM

For those that don't know how to test an alternator or a starter motor, here are some really simple articles with videos to help trouble shoot and reduce the cost of running your car ;