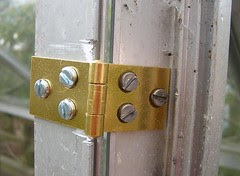 Today I have been mostly glazing a greenhouse. It's a second hand one given to our neighbour to free up space in our garden for a nice new one that sits ominously in it's packing on the patio. Yesterday we set up the base and lifted an intact aluminium frame over the fence. Today we put the glass back in, a job that should take a couple of hours.

To be honest most of the glazing went well. There were some niggles - the parts come from two nearly identical buildings which had slight differences. A few mm in the width of a pane of glass make a big difference when you are trying to fit it in a space slightly too small. The scar on my left arm from a childhood encounter with a window makes me especially wary of glass anyway. What's the point of a material you can't fit with a hammer ?

The biggest problem was the door. Originally this was a sliding effort but one of the top rollers was broken and the bracket that held the bottom in had gone missing. Apparently greenhouses without doors aren't a good idea so we needed to fill the hole in one end.
I can't make sliding doors but hinged ones are a possibility. After a bit of playing around it looked like fitting a couple of hinges to make the door swing might work. A dig in the garage unearthed a couple that looked promising and some bolts to attach them to the frame.

Some slight alterations to each hinge we needed and several bits of aluminum frame were hacked away with a junior hacksaw both to accommodate the hinge and allow the door to swing. Obviously these were carefully planned and measured, not just hacked away until things worked...

The door is held shut by a simple hasp nicked from our shed which has a proper lockable one - worth more than the shed contents I think. In fact the whole job was done for no money as we recycled all the bits or used up old items stored for a rainy day. This makes it a very Green house !
Posted by Phil Parker at 5:08 PM