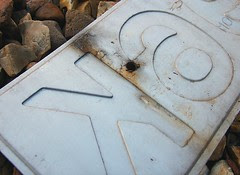 number plate
Originally uploaded by Phil_Parker.
I wonder how some things happen. Last Saturday I was driving out of the car park and there was a horrible grinding noise from the front of the van. My first thought was that the spoiler had finally given up the ghost and was dragging along the road. A quick look showed it was the numberplate doing the dragging.

One of the fixing bolts had come off and the plate hang down. Since it's aluminum (the nice black and silver sort as the van is old enough to avoid the horrid reflective version) it didn't shatter but stayed intact if a little bent.

Removing the other bolt was easy but I wondered how long the nut from the back of the other one had been missing. I guess that was the problem as I'd heard a familiar twang when reversing - familiar because parking over some high kerbs cause the spoiler to rub when a fat bloke like me sits in the drivers seat. This twang must have been the numberplate flicking the bolt out.

Fortunately this is an easy fix. Dig a spare bolt out of the drawer and re-fit. Obviously I had a spare as the holes aren't equally spaced on the 'plate and I like to use a black bolt on the black bit and a pale grey one on the silver. Still I suppose I can live with indignity of two grey bolts. For a while anyway.
Posted by Phil Parker at 6:21 PM