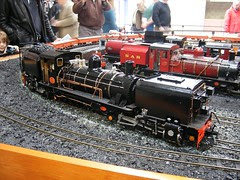 There are no end of modelling events at this time of year. This one probably wouldn't draw me if it wasn't 10 minutes drive from my front door. Much as I love garden railway sized models and do plan an outdoor layout one day - the 16mm Association show a couple of weeks ago would probably suffice. But it is handy so it would seem rude not to attend.

The show is given over to models 7mm scale upwards although mostly it's G gauge and 16mm stuff. It's probably the only chance to see 14 layouts in one hall so the £7.50 admission price probably isn't bad value.

The event can be summed up by one sign rendered especially pointless. In the cafe area it says "Please do not smoke". Normally I'd agree as no-one wants their atmosphere polluted but this time - well I suspect we were breathing a air that was half made up of steam, smoke, meths, gas and coal fumes. Not unpleasant in the way that only oily steam engines manage to be but a far cry from the normal exhibition hall atmosphere !

My picture shows a 16mm scale Garratt locomotive which I could have watched for hours. It chugged around pulling an enormous train with steam coming out of all the right places and a lovely soft exhaust beat. For those who want an idea I filmed it for your pleasure.

Favourite layout was an O gauge model - Newchappel Junction. It's quite simply the best 7mm model I have seen for many years. The trackplan is a terminus station which run out past a generous sized goods yard. Instead of disappearing into a tunnel followed by a fiddle yard, you get a junction (obviously) and a circuit of double track. Trains therefore leave the station, circulate around a few times and then return to the platform or yard. There is no hidden or unsceniced trackwork and despite not running to a timetable the trains actually appear to come and go for a purpose.

The weird thing is that this is a 51ft long model which has been on the circuit for 25 years and yet I don't remember it. Apparently it even appeared at the same show last year ! I must have been asleep when I visited.

Anyway, trade was pretty good although many people would recognise stands from the 16mm event. This was a better for but I'd gone to see Mercian Models and pick up some projects that will be appearing on this blog very soon. G1 modellers take note.

Mind you if my lottery ticket comes up tonight then I'm going back to the show. There is a GRS Garratt kit I fancy and Barrett Engineering has started doing G1 live steam kits designed for non-engineers. City of Truro would for £1650 (I think, didn't write it down), sounds like a bargain to me !