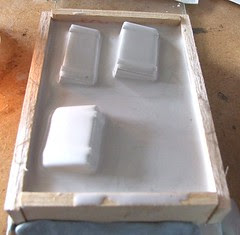 floaty resin
Originally uploaded by Phil_Parker.
Our On30 layout needs some details. Specifically lots and lots of packing cases. Now we could build then all individually. Each would be a beautiful model, unique and interesting and make the heart sing.

Life's too short for that though. No-one cares anyway - they just see a mass of miniature boxes and then move on to see if the next door trader has the latest Bachby locomotive for 10 pence less than that other guy...

So, we've made 4 and will cast copies in polyester resin. That means I have to make a mould. This didn't go exactly as planned. You see the boxes are wooden covered with plasticard. And as I discovered, they float in the mould mix. Looks like I need to glue them down then pour the mould stuff in.
Posted by Phil Parker at 5:52 PM

Email ThisBlogThis!Share to TwitterShare to FacebookShare to Pinterest
Labels: model railway, On30