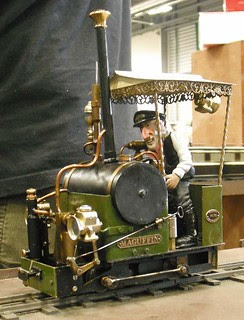 A new venue in a new location for this event but still the same excellent mix of trade and layouts to delight the garden railway fan working in the larger scales. This years trip was a little longer than in previous years - an hour and a half not 15 minutes - but looking at the guide it still looked worth a run.

The East of England showground is much like Stoneleigh park except that there is proper car parking next to the hall. The hall itself is just like any other modern-ish exhibition space. Basically a big open box with some lights in the ceiling and some big signs on the wall to show you where the toilets are.

80 traders were promised and although I didn't count them, I can't disagree. As we arrived at about 10:30, the early shoppers were heading back to the their vehicles clutching big boxes and huge bags. In the larger scales it's worth ordering stuff to be collected at a show as the saving in postage will probably cover the admission price. With the new rates from the Post Office, it will probably be cheaper next year to travel by Jumbo Jet as well !

The trade made a dent in the Parker finances. We left with a small building and a heck of a lot of books along with a good few "little bits". There's another building on order too so plenty of blog action to come !

In amongst the trade are the layouts. There seemed to be more of these than in the past. I'm not going to describe them but took a little video so you can watch the chuff chuffs go by. There's a bit of Garratt action 'cos I really like them but the 7/8th inch scale Peckett sounds brilliant too.


One thing I do notice is that there is a lot more modelling going on. In the past, these models in the past have been little more than bare-board test tracks. Fine for the loco owners to exercise their locomotives but a bit dull for the visitor. Now though, you can see a people taking the opportunities that the larger scales provide to create some lovely, highly detailed scenes. The station cottage on one 16mm layout was a gem and worth treating as a scene on it's own. 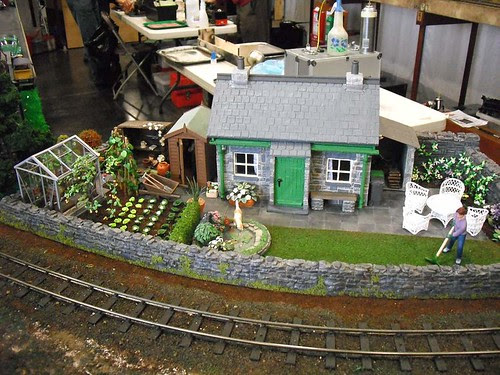 Regular readers hoping for some cake reviews will be disappointed though, by the time I got to the refreshment stand in the hall it had all gone ! A shame really as the slices I'd seen earlier looked really scrummy.

Never mind, have a look at the photos on Flickr.
Posted by Phil Parker at 6:00 AM