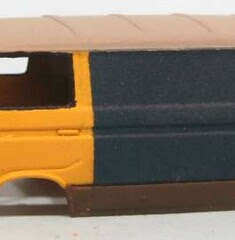 Last week, I had a go with some acrylic paint, and it didn't go well. Not to be deterred, I stripped it all off using Precision Paints stripper, and had another go.

This time I was going to spray the stuff. This isn't so much because it avoids those nasty brush marks, not because it's what "proper" modellers to. Nope, it's 'cos sprayed paint dries faster so you can build up a decent depth of colour very quickly with lots of thin coats.

Three evenings of spraying, waiting, masking and spraying again and the bodyshell was in the colours I wanted. The ones I could be bothered to spray anyway. Using Tamiya masking tape (so much cheaper if you just buy the refills rather than the plastic cased stuff) the lines were OK and unusually for me, in about the right place. The paint was very, very matt though.

It also had the texture of fine sandpaper. Those paint droplets probably needed a bit more thinner so they didn't dry as soon as they hit the plastic. It wasn't a warm evening, quite the opposite in fact so that can't have been the problem. Enamel wouldn't have behaved like this... Anyway, the project involved transfers and even I know these don't like sticking to rough paint jobs. In that nice Mr Dent's book he says you should spray matt things with gloss varnish to provide a smooth surface - that way air bubbles don't collect under the transfer film and look 'orrible. So that's what I did. A coat of Humbrol enamel varnish. Nice and thin. Result, slightly finer sandpaper. Never mind, I'm sure it will all be OK.

(Actually, the photos is deceptive. It looked a lot smoother than that, but you get the idea)
Posted by Phil Parker at 6:00 AM

Aren't you glad you started this? ;-)

As it turns out, the results are worth it. See tomorrows post...