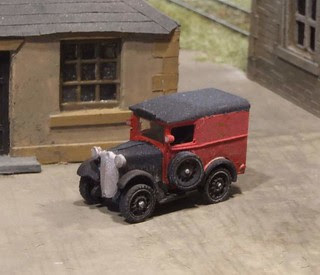 I can't resist posting a picture of the finished PO van. A little bit of digging on the interweb provided me with the correct colour scheme, or at least what I think is the correct one.

All this surfing revealed that people who preseve these things don't all paint them in the same colours. Maybe the local depots had a different take on the correct livery but I doubt it. The Post Office was always a pretty strict organisation.

Every example displayed a black bonnet and chrome grille but elsewhere there were some other bits in black around the windscreen. I pondered putting these in, my new Trumpeter brush was holding its fine point very well, but in such a tiny scale they could look a bit heavy. 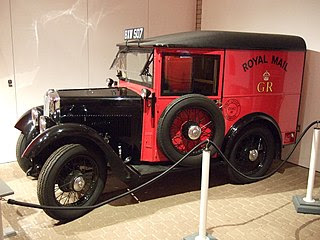 Worse, the script "Royal Mail" over the crown on the side is either gold or black depending on whose version you are looking at. I went gold but can't be sure I'm right, the photo on the left would tend to suggest I am wrong. This is an area where I am sure the Postmaster General would have laid down the law.

Not to worry, the model looks nice enough. A little weathering courtesy of a thin wash of dark brown is all the dirt I needed. Some post washing lackey would doubtless have removed all the filth each day so there's no need to serious deposits.A little light much just highlights the detail.
Posted by Phil Parker at 6:00 AM