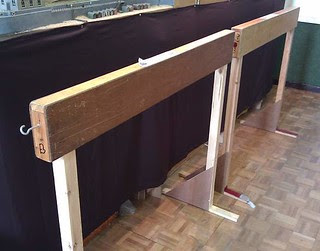 We don't supply barriers. I think that is common with many exhibitions now", was the response I received when enquiring of an exhibition manager recently.

Is this really the case ?

I can't think of many shows I've been to over the last 5 years where barriers haven't been provided. Certainly all the big shows make the effort and most of the medium sized ones too. Having built quite a few myself and had the "joy" of shipping them to and from the exhibition, I know what a pain they can be but still feel they are integral to the organising of a model railway show.

This isn't just me being a prima donna. Obviously I want some protect from the hordes but it's more than that.

First, I want to protect the layout. Sans barriers, there are plenty of people who think that' it's OK to use the front edge of the model to support themselves. It isn't, you'll tear up the ground cover and damage the detail, but that won't stop them. I was very glad at one show for the barriers as I watched one elderly gent hobble around - he lent on one stick but every time an suitable handhold came within reach, a large, fleshy hand grabbed it. I hate to think what damage it would have done to a model...

"Put perspex along the front if you are so worried", I hear someone cry. "No", I reply. I hate the stuff along the front of a model. It's not that clear, especially after a few trips out, so it obscures the all-important eye-level view. Then you have to consider how tall it has to be. 6 inches seems popular, putting a nice edge line in everyones way if they do bend down.

It doesn't solve the problem either - I've seem people grab to the top of it to lean. Unless you've bought seriously thick stuff, eventually it will snap leaving a punter gripping sharp shards of plastic and you with a bill for replacement.

More than that, it just looks (IMHO) wrong. I don't want to operate in a goldfish bowl, models look better if the viewer feels they are in the same room without any obstructions.

From a punters point of view, a barrier is a good thing. Properly made, it provides a handy resting place for serious contemplation of the marvels in front of their nose. Obviously it mustn't be too low or the aisle file with railway modellers backsides, nor too high where the view of the layout can be blocked.

Small children can be sat on the barrier too, providing a welcome respite for parents. The Leamington barriers shown above were tested with what was at the time, our heaviest member, and survived to tell the tale.

So, if YOU are organising show, beg, borrow or build some crowd barriers. If you can't do that, at least let your exhibitors know so they can chuck a couple in the car with the layout.
Posted by Phil Parker at 6:00 AM

As an exhibition attendee, I agree totally.
Barriers should be sturdy wooden affairs set at a height that is comfortable to lean on, in fact a bit of padding would be nice... (And a cupholder, or is that taking things to far?)
Lengths of rope hanging between uprights may be well suited to keep cinema crowds in line but cannot be used to prop up contemplating train enthusiasts and therefore have no place at a model railway show.