Foden Steam lorry - Can I use it ? 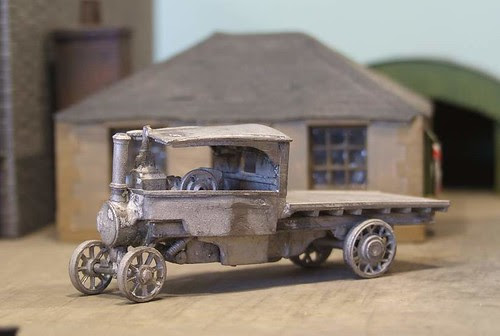 Digging through my box of 3mm scale bit'n'pieces, I found this - a Whitemetal Foden Steam lorry.

There are a few issues with the model. The back end needs raising or the front dropping. At the moment it appears that someone has decided to "Pimp my steam lorry" and got the instructions for the suspension mixed up. I suppose I could put a load on the back that appears to be enormously heavy but I think just filing a bit off the front would be a more sensible scheme.

But is it worth it ? How late did these things stay in service ?

Flockburgh is set in the late 1950's and early to mid-60's. Now I know that some vehicles lasted longer on the road than others but I suspect I'm stretching things a lot to keep this one. I mean, when I was a kid in the late 1970's we stayed every year for our holidays in a small Scottish village where the milk was delivered by horse and cart but that was an anomaly.

Anyone care to recall a reason I shouldn't put this back in the box ?
Posted by Phil Parker at 6:00 AM

Following the publication of the Salter Report, in 1933, steam lorries were "killed off" for general haulage when the taxation of goods vehicles became based on the unladen weight.

The survivors generally worked in places like docks and steel works where there were large internal road networks. So provided your Foden stays on the quayside at Flockburgh you will be OK.

Or, of course, it doesn't actually have to be 'in service' to be on display.

I suspect that a lot of old lorries like this were just left to die quietly by the roadside in a patch of brambles. The 'collapsed rear suspension' takes you half-way there...

At that time, the traction engine preservation movement was just starting to get going - maybe it could be off to a steam rally?