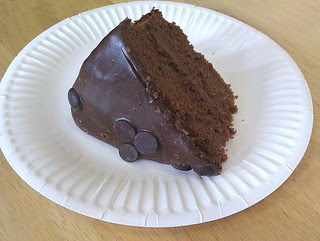 An old exhibition manager for the Leamington show used to say that to find the best layouts for your show, you had to visit the local events because that is where you would discover the gems that most people overlooked. That way you’d get new layouts before anyone else and build the reputation of your event.


Amersham & Chorelywood’s event last Saturday was just the sort of thing he meant. Only lasting for one day and taking place in a community centre (actually a community centre and two old barns) somewhere that to me is darn sarf, it’s not one Id ever visited before or a show that features in most peoples calendar unless they are local.


But if you made the effort, there were gems to be found.


Then the layouts. We had taken Flockburgh and set up in the main hall. I was glad we were there as once it got busy, the barns were difficult to move around in. Forcing your way through the crowds was worth it though. Four models stuck in my mind: 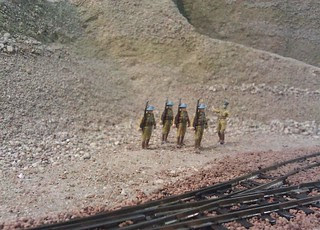 Khan – A slice of Namibia showing the gorge where a fictitious new alignment has bypassed the real 1 in 25 gradients. Set in 1908, the model was on the end of the best bit of layout criticism ever according to the owner. He has a vulture perched in a steel tower eating. Vultures (apparently) don’t carry food away to eat, the gobble on the ground. The bird is staying but it gives an idea of the sort of detail to be found. 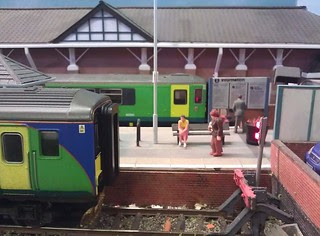 Cromer 2008 – The modern railway writ small. Cromer station is a tiny terminus around the back of Morrisons supermarket. A lovely bit of modelling with surprisingly interesting operation albeit multiple unit based. While not as exciting as the station would have been in steam days, it showed the realities of modern railways perfectly. 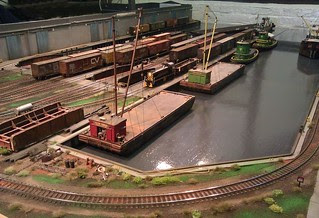 Fulton Terminal – Most of this layout was water ! Situated on the East River and operated by the New York Railway, wagons were shunted on and off floats which would in real life have then been shunted by tugboat around the docks. The owner explained the system to me and it is fascinating. I particularly like the idea of box cars on floats being moved up to the side of ships and loaded directly, then floated back to the rail connection for onward transit. 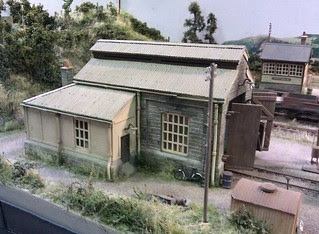 Penros – It might be ex-GWR and set in Wales but I just loved this layout. The modelling was superb and the colouration. I would love to be able to produce something that looked this good. A beautiful model.


That’s not to say that there was anything wrong with the rest of the layouts, it’s just that these ones stuck in my mind. You can really tell the exhibition manager travels to book exhibits.


Flockburgh ran OK. We had lots of interest and quite a bit of chat. Unusually the first serious chat was with a woman who had just taken up the hobby at the prompting of her boyfriend. Being new to it, she still erroneously pronounced OO as “double zero” gauge BUT had hit upon the excellent method of making the layout from insulting foam. This shows what happens when you approach a subject with an open mind – doing this sort of thing is normally the preserves of super finescale experts and discussed in hushed tones by others as revolutionary. If you are reading this, good luck with the project. I think you’ll make it successful and prove that many of us are too hidebound by the “conventional” methods.


So, a good show and well worth the visit if you are in the area. The venue is easy to access, being a few minutes’ walk from an underground station. We parked at the centre and were reminded about the parking wardens four times in half an hour while setting up. I had had a chat with the bloke who was actually quite nice. 7 quid bought us a spot right outside the door which was very welcome as packing up time.

There are some photos on Flickr. Sadly I'd left my camera in East Anglia, so they were taken with my 'phone. See them here.