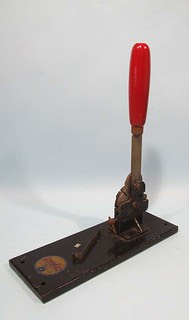 More vintage model making stuff for a Friday - this time a Juneero Tool.

Sit tight readers because thanks to the interweb, I can tell you that Juneero was a kind of do-it-yourself Meccano. In the box were strips of aluminium and this tool. You then used it to cut them to length, punch holes and bolt together. Because it was sold as an engineering training aid rather than a toy, it was even produced during WWII. According to this website, production started in the 1930's and finished 20 years later. By that time kids had become too lazy to punch thier own metal and preferred the RTR Meccano version.

The tool was picked up at a car boot sale for 50p because neither I or the vendor knew anything about it. Back on the bench, the cutting works well on scrap nickel silver from an old kit. The right angled bend bit isn't bad either although the corners aren't that sharp. Mind you my metal of choice is harder and the device is 50 years old or more.

Holes of 3mm diameter are neatly punched. Here the harder metal and a bluntish punch are exposed as the leftover has to be pulled away. It's not a bad effort though.

Anyway, I think this might be useful. I can't see anyone wanting to buy it and after all this time it would be a shame to chuck it in the bin, so it's into the cupboard for the moment and I'll see if I can find a use for it.

Hi Phil, I have a couple of those Juneero tools. Still in use sometimes. There was also a jig for cutting and measuring and a separate hole punch. All Juneero items i.e. strip,bar, nuts bolts etc was sixpence a packet ( old money. It was like meccano but you had to cut and measure your own bits. rgds curly

hi. I have been trying to buy one of these to give to a friend who had one as a child. please let me know if you ever want to sell it. thanks
Paul Gibbs

Paul - I'd be happy to pass it on to you. Mail me using the Ask Phil Button and we'll sort something out.

Hi Phil, i know its a long shot, but did you pass on the Junerro or do you still have it? im trying to find one for my Dads birthday. He had one when he was 8 in 1948! was his favourite toy! would love to find one - if you dont have yours, perhapse you know someone who does?
any help would be much appreciated.
Katherine

Sorry - I could have sold this 3 times now! It's long gone I'm afraid.

Amazing how many people remember this stuff.

I have a Juneero set with wrapped rods. It seems to be pretty new, possibly unused?

I have a Juneero set with wrapped rods to create something. It seems new possibly unused? If anyone is still interested after all this time.

Pl help me find own for sale.

I had a Juneero kit when I was about eleven, in 1946 or so. I asked for one as a Christmas present and I remember making a crane with it.

I've just bought a Janeero tool and some rods and various wheels and heard. I had one in the 1950's as a child. I'm after the other items such as the thread cutting die and some metal strips.

I have just bought a Juneero tool with some rods,wheels and gears in an original box. I had a Juneero set as a child in the 50's. I'm now looking for other tools such as the thread cutting die and other consumables such as the flat and angle strip, bolts and nuts. Many thanks and hope anyone can help.

My father bought me a Juneero set when I was 8, around 1954. As well as the features described, there was also a steel spiral former for bending the (steel) strip into curves, and of course a tap and die.

I am sure there exists a real demand if this product were to be reintroduced. In the meantime, anyone know where I could get something similar?

Hi, writing from Denmark . Going through some old stuff, I’ve come across a few Juneero parts:

28 metal strips approx. 15” long
17 metal strips approx. 10” long, all a little rusty, especially at the end
6 angled strips, 15”, rusty
and not least, a grinding jig with graduated bending curves
Finally I found a small amount of slightly rusty bolts and nuts, I believe them to be
Juneero too.
Anyone interested?