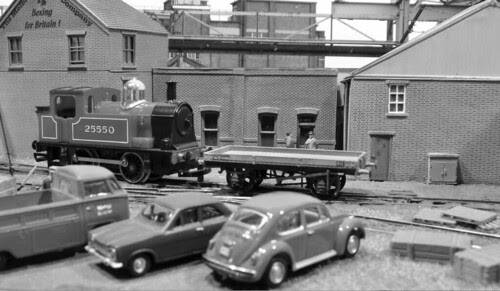 Down at the Melbridge Box Company, 0-4-0 shunter 25550 drags a single plank wagon towards the machine shop where yet another once expensive bit of heavy engineering equipment is due to be loaded. From there, it will be shipped abroad to make boxes in Hong Kong or somewhere else where the locals will work for a pittance in conditions that would make a British worker cry.

Despite this, the gentlemen in the UK who will buy the products, usually model trains, that are encased in these boxes will complain that the price is too high and it really would be better if they weren't being made by johnny foreigner. At the same time the owners of the factory will peer at the ledgers and comment that it's a good job they are manufacturing abroad or the recommended retail price would need to be three times what it is now.

The 1970s are in full swing as you can see from the car park. The Ford Cortina could do with a wash but the Beetle owner seems prouder of his brand new bug. It replaces the 1965 model that he felt was still all right but his wife knew belied its age to anyone who knew that sloping headlights had disappeared 3 years after it was made, and didn't want the neighbours to think they weren't doing well.

On the tracks, the shunter is very well looked after by it's crew who have nicknamed it "Polly" but it too will soon be sold for scrap as the march of the lorry moves ever onwards. Luckily, it will be saved from the torch and find employment on a preserved line where it will be allowed to pull carriages to the delight of children who prefer red paint and chrome domes to the dull green GWR tank engines.

(With apologies to Chris Nevard, who does these made up histories better, or at least can make his camera to depth of field)
Posted by Phil Parker at 6:00 AM