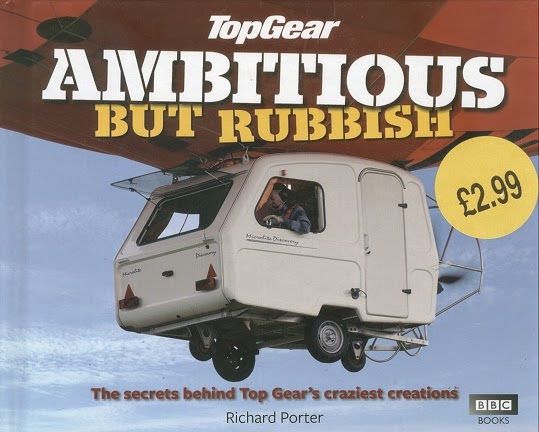 They say that inside every fat person, there is a thin person trying to get out.

In a similar vein, inside the behemoth that is the BBCs popular Top Gear TV programme, there is an excellent book or TV series desperate to emerge.

This isn't that book. But it's close.

Ambitious But Rubbish covers the Top Gear challenges where the presenters invent something, be it an amphibious car to a Reliant Robbins space shuttle. In truth the work is contracted out to people who know what they are doing and the presenter just gurns for the camera.

What I've never understood is why there isn't a backup documentary telling the behind-the-scenes story of each one. It's something useful for BBC3 for a start. Perhaps the Beeb think that it would spoil matters if we saw the TV trickery going on.

Never mind. This tiny book purports to give a little peak behind the magic curtain. It does this as well as it can which is to say, not very much but enough to make me want more. There are some nice little details provided but since each projects gets less than an A4 page of coverage including photos, this is all frustratingly brief. OK, I don't really need to know about the various cheap car challengers much but the Damper van project made me want to build a model. I would love more information on that.