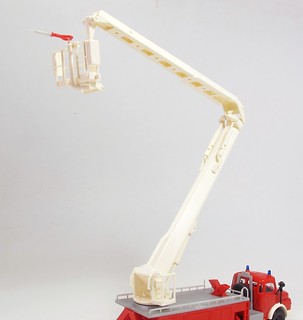 Now for the impressive part. The hydraulic arm that supports the cradle is made up of loads of pieces, quite a lot of which clip in to each other and must on no account come in to contact with any glue!

Talking of glue, the instructions say these parts must be assembled with ABS solvent, not the normal plastic stuff.

I couldn't tell the difference between the two materials by touch, although the ABS seemed a bit softer perhaps. The pipe up the nozzle broke twice while I tried to drill out the hole in the top but I sploshed the solvent on and pushed the parts together and it seems OK.

One problem is that with lots of parts sliding inside each other, it would have been better to mould some in silver rather than white. Painting the while bits would be easy and the result would look more realistic. Keen types would replace the silver parts with metal rods of course but that's several steps too far for me.

The arm is simply pushed in to the back of the lorry body so it can be pulled off if required. I'm a little surprised that there wasn't a retaining collar inside. Mind you, it doesn't appear to want to fall off so I suppose it's all right.
Posted by Phil Parker at 5:30 AM