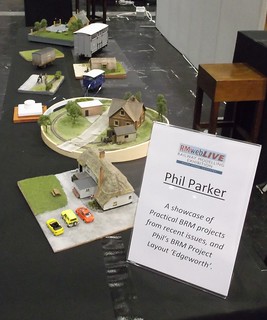 Months ago, when we were first talking about RMWeb Live, I'm not sure any of us really knew exactly what the show would look like on the day. Obviously we had a pretty good idea but when doing something new, you don't really know until you see it in the hall.

Back then, the plan had been to do something different from the standard exhibition. Since the forum after which the show is named is all about information exchange, it seemed a good plan to try and set the show up in a similar manner. Therefore the plan involved skills zones covering different topics. In these you would find demonstrators who could show and explain how to do things, layouts using those techniques and appropriate traders.

Not only was this a new type of show, it was in a new to us hall - the Ricoh Stadium in Coventry. When first mooted, this was to be football free, but three weeks before the opening, Coventry City FC settled their arguments with the owners and were allowed back, and of course one of the matches was to be on the same day as the show.

Anyway, I turned up in my little hire van, a rather excellent VW Caddy, and found my table handily marked with a stand up poster. The tables for demos are new. Higher than normal, they allowed the demonstrators to talk to people who were standing up. They were also 6ft long and very solid. Perfect for the job.

Saturday dawns and the first thing I find is that I've set up in the wrong place. It seems there was a slight change to the plan between the programme being printed and the opening. Fortunately with a bit of help we lugged Edgeworth to the next aisle and managed to swap my stand with one of the other demos without causing chaos (thanks for being understanding Tim).

First visitor was none other than Radio 6 Musics Steve Lamacq who was hosting the theatre over the weekend. Before getting down to work he'd been keen to see the projects written up in the magazine, of which I had a small selection.

It has to be admitted that visitor numbers were well down on expectations but despite this, I spent the entire day talking to people, not emerging from behind Edgeworth until closing. I hope people enjoyed themselves, certainly plenty took time to poke around behind the layout - which is the point of bringing it along. 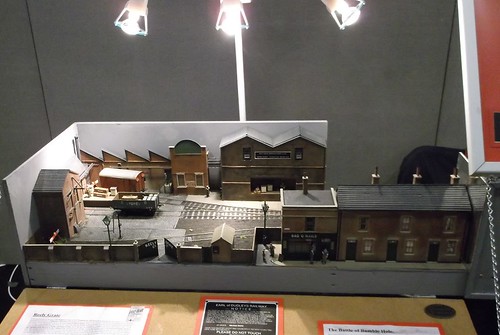 Sunday was more of the same after we watched RMWeb's very own Andy York and BRM's Steve Cole being doused with icey water for charity. The previous evening at the meal, Andy said he'd do it if we collected more than £100. The final total was over twice that so his cold wash was well worth it.

Sunday morning allowed me a quick run around the show with a camera. There were more then the usual number of small layouts. In that respect I wish I'd been a visitor as regular readers will know these are just my sort of thing.

Another day chatting and then a surprisingly swift packing up and exit. An excellent weekend, although my legs felt it for two days afterward. That hall floor is hard and I forgot to take some carpet to stand on!

Overall, the Skill Zone concept worked. Large banners overhead guided visitors and made the show look good. Hopefully future events will be able to secure a few more demos and traders to enlarge the areas. At least those who came enjoyed them. We must have done something right as to quote Simon Kohler from the Hornby stand, "I asked numerous visitors to the show if they had learnt something new during their visit and to a man (and woman) they all said that they had". Success indeed.

My photos on Flickr.
Posted by Phil Parker at 5:30 AM

I wonder if the poor attendance was down to competing shows that weekend (if I was free, which I wasn't, I would have gone to ExpoEM norf), or if the concept was too 'different' for a lot of modellers? Perhaps us modellers are actually quite conservative folk who are used to the usual exhibition format and aren't willing to gamble a day on something new and untried.

I have wondered if being different is a problem. Lots of people moan on-line that they want someone to break the cycle of layouts booked by the foot and box-shifting traders, but those are the shows with the big crowds.