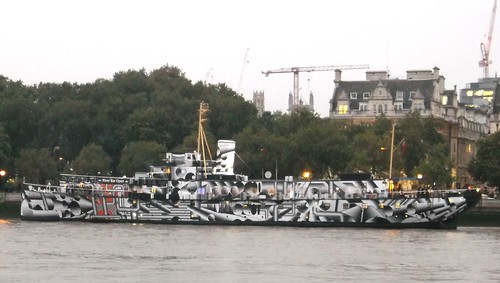 See that ship? Not very clearly.

Spotted in London a couple of weeks ago, this is the first time I've seen dazzle camouflage applied to a full-sized vessel.

The theory is that the disruptive pattern makes it harder to see the ship as your eye can't clearly make out the general shape. If you are aiming a gun or torpedo at it, you might be able to see something but it's harder to work out what and how big it is.

Paint schemes seem to have been applied sporadically during both world wars. Oddly, one campaign where the navy preferred grey boats was in the Pacific where they faced Kamikaze pilots. That's one area where confusing the vision of your attacker would have offered quite a benefit I would have thought.

I'm particularly interested in this as near where I live is the proving ground for Jaguar, Aston Martin and Landrover. Cars are often seen in a version of dazzle camouflage driving around some of the country lanes. The paint, sometimes only applied to part of the vehicle, is intended to make it harder for photographers to get a decent shot to leak the details of new models. I've never managed to photograph one myself but here's the same sort of thing on an Audi. 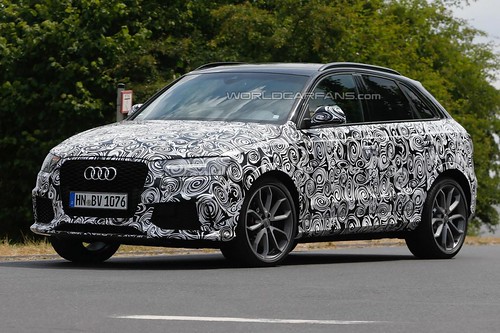 Now, who fancies trying to paint a model, car or ship, in these colours?
Posted by Phil Parker at 5:30 AM

I wonder if you could get a similar effect by floating the paint on water, then moving the model up through it - a quick Google search told me that it might be called "Suminagashi"

Something ironic in that particular British ship, HMS President / HMS Saxifrage, being painted in a dazzle scheme by a German artist

That's an amazing scheme on the ship. Norman Wilkinson, the celebrated marine and railway painter is generally credited with the idea of "dazzle" camouflage, rather a cubist excursion for someone who was very much a conventional (if highly accomplished) figurative painter!

I've been wondering about the preference of the Navy for grey in the Pacific. Could it be that dazzle is more effective when viewed from other ships? when seen against the sky a ship is easy to identify from its outline, whereas seen from the air grey may be more effective.