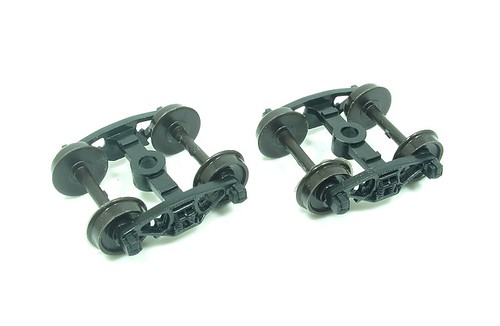 In general, I'm quite impressed with Accurail's kit, apart from one thing. The wheels.

I don't know how they think in the land of the free, but over here in Blighty, we like our wheels made out of metal. We do not like shiny plastic with wobbly, and near impossible to remove, flash around the flanges thank you very much.

To be fair, the bogies roll well although I had to try one of the axles in a couple of places to get it to work. Not sure how that is as putting a different axle in the position it had just come from showed no problem.

If I'm being picky, the brake shoes don't line up with the treads either but since I think this kit was originally designed in the 1990s, that isn't so much of a surprise. On a layout you probably wouldn't notice and if you did, the vast gap between shoe and wheel tread will probably offend you more.

Still, other than clipping the axles in, there was no construction to this step making it pretty idiot proof.

I suspect that a major reason for the continued popularity of plastic wheelsets with manufacturers of US outline rolling stock is the widespread use of Kadee couplers or their equivalent and, more to the point, quite powerful permanent magnets for uncoupling.

While it is, of course, possible to make non-magnetic metal wheelsets, in the case of the Accurail kits perhaps price has ruled it out; I've just checked a boxcar kit I have sitting in the desk drawer.......this is a higher specification kit by Branchline Trains with separate wire grab rails, etc., and does have metal wheelsets (albeit with plastic axles!) but would have been rather more expensive in the first place.

In the end you pays your money and you takes your choice I suppose.....
Simon Hargraves.

I replace all my Accurail wheelsets with metal ones from Intermountain.

I also replace the couplers with Kadee couplers, which just work better -- and are also made of metal so more reliable.

Plastic wheelsets are disappearing fast. Accurail is the only mainstream manufacturer still using plastic wheelsets on non-toy models. I suspect it's because they can cast them themselves and so keep the price down.

The other thing I'd like to note here are the body mounted couplers. No talgo trucks here.

On the whole, I really like Accurail trucks. Many modellers use them even on high-end models. They are crisply moulded and look good.