Back in January, on the Hornby/Airfix/Scalectrix stand at the London Toy Fair, I spotted something very exciting indeed - a Beetle!

Draw a venn diagram of things I like and both Lego and Veedubs will be on there. This kit lives at the intersection between those circles as well as the big one marked "Making things". You can imagine how excited I was when I finally found a newly released kit in a Brummy shop. Inside, the components owe a lot to Lego losing a patent case a few years ago. OK, they aren't exactly Lego but I bet, as they say on other copycat versions, the parts are "Compatible with leading brands". When I was a kid, I wondered if Lego would eventually evolve to produce realistic plastic kits. It seems I was right, even if it didn't happen quite the way I thought. Mind you, the boys from Denmark are a bit hot on special one-kit pieces apparently so I wasn't that far off. 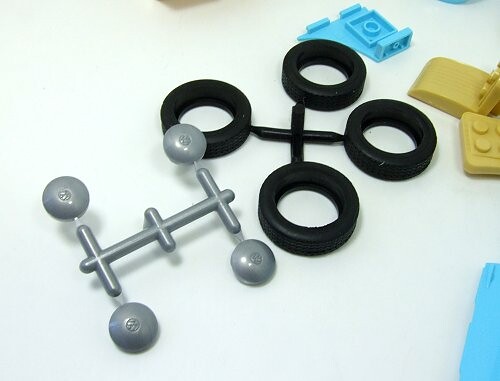 Although no glue is required, some parts have to be removed from sprues. They twist off OK but removing the leftover nib is a job for an adult with a craft knife or and emery board. Assembly is simple enough. The instruction designers have obviously looked at Lego but can't resist a bit of Airfix too. Highlighted studs are brought together in an unnecessary level of detail. The tyre to wheel assembly confused me as it's not obvious which way around the rubber bits go on the wheels, but once you try, they only fit one way around. The most pleasing thing about the model is it really looks like a Beetle. Those curved lines aren't easy to capture and yet I think the Airfix boys have done a superb job. I reckon this could for the basis for a scale model with a bit of work. I fancy changing the colour myself so this might not be the last appearance of this model on the blog.
Posted by Phil Parker at 5:30 AM

Don't tell me - a "Chip Foose special" - or, perhaps, one of those "subtle" custom schemes, straight out of "Max Power" magazine - not forgetting some LED lights ... .

On second thoughts, perhaps not.

OK, some custom paint jobs can look quite good - especially if they're actually tasteful - and they effectively pick out some of the contours and panels on a beetle.

Saying that, whatever beetles are like as cars - whatever they're like to drive etc., they're still classic cars, in much the same way as Morris Minor Travellers, Ford Anglias, old Jaguars - and Kharmann Ghias, for that matter.

I'm afraid that I personally prefer to see cars well maintained and, if possible, as near "mint" as is reasonable.

Safety improvements (like better brakes and lights) are fine - especially when they can be put in without ruining the original car - but I'd prefer to leave the custom paint jobs for scrappers, which someone's doing up to stop them being "cubed".


As for this model kit, your photos suggest that the finished version looks something like "right" - do you reckon it comes out reasonably close to a standard scale (like 1:32, or something) - or does it seem more like a "box scale"?

Also, does it seem to be made of a plastic that would take standard enamel and acrylic modelling paints?

Thats awesome Phil!!! Where cud i find one of these kits? Cheers

Huw - I think it's too big for 1/32nd, more like 1/22nd so techncally, G Scale. Ideal for garden railways perhaps as being plastic, its weatherproof.

As for paint, well, it's something I plan to find out. No fancy schemes, I prefer stuff stock.

Matthew - Any toay or model shop that sotkcs the Airfix Quickbuild range. Or online: http://www.airfix.com/uk-en/shop/quick-build/airfix-quick-build-vw-beetle.html