Just over a week ago, I headed down to the Bluebell Railway for their model railway event. While it was a nice day out, the real aim was to go and photograph the pre-production Oxford Rail Adams Radial for MREmag. First impressions are good and if I didn't have a kit-built version, I could be very tempted indeed. More details on MREmag.
Reaching the Bluebell by train from Leamington was surprisingly easy - Ciltern to Marylebone, 2 tubes to Victoria and then a Southern train to East Grinstead. £45 although this was a late booking so it might have been possible to reduce this. Just under three and a half hours too so about the right amount of reading time.
After that I was in a beautifully restored birdcage coach and on my way behind a chuffer to Sheffield Park station. £17 for an all-day ticket.
The show was, if I'm honest, not nearly as good as the GCR event a couple of weeks before. While the floor didn't bounce, the layouts weren't nearly as good, nor the trade as impressive - although the GCR had set a very high bar that many shows wouldn't reach. This was a preserved railway doing model railways, not a high quality model rail show with a preserved railway attached.
That said, there were interesting models to be seen. The Bluebell is value for money and I certainly enjoyed myself. The full-sized stations looks fantastic and being Southern, very different from what I'm used to in the Midlands. Hostead Keynes with its underpass between platforms is especially interesting. 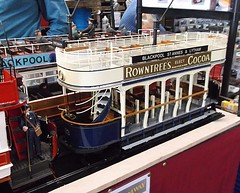 Perhaps in keeping with the preserved railway ethos, there was more model engineering on show. A large live steam Gauge 1 layout shared space in an engine shed with a 3/4 inch to the foot tram system. I love both of these so wasn't disappointed.

Regular readers will of course want to know about the cake situation. I can report that the cream tea served aboard the Pullman coach at Sheffield Park is excellent and at under a fiver, good value. Lots of tea, delicious fruit (one of the 5-a-day) scones, jam and cream. All served in luxurious surroundings.