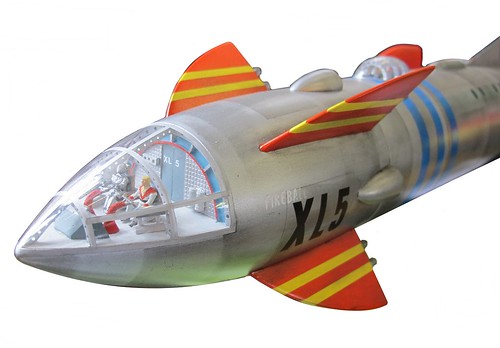 Time for a break from all those model railway shows with a trip to Buckinghamshire for the Smallspace Exhibition of all things sci-fi.
The star of the show this year was the Whomobile - a futuristic looking car commissioned by Jon Pertwee and owned by him. Now restored, it appeared on a trailer and every hour, there was a raffle for the chance to sit in it.

The most fascinating thing about this years displays was the number of original TV or film props and just how crude these were. The large Space 1999 Eagles are impressive but even here you can see the woodscrews used to retain the equipment pods as well as the plumbing to direct freon gass out of the rocket engine nozzles.

An alien spacecraft from UFO looked tatty but was apparently used in the distance for some shots to creature forced perspective. One lit and whirling around, I suppose no-one could see the detail. Along side it was a Luton-van model based on a MK1 transit and lettered for HS studios, the fictional cover for SHADOW in the series. I wonder how difficult it will be to make one of these one Oxford diecast produce their normal version? 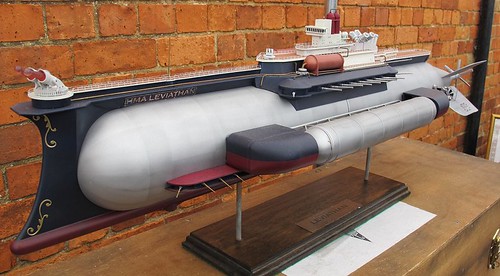 Outside but under canvas were a fine selection of steampunk models. The imagination and skill that goes into creating these amazes me every time I see them. At some point I really want to have a go at this sort of modelling myself. For the minute, take a trip to Herr Doktor's blog and have a look. I particularly like the idea that after defeating the Martians in "War of the Worlds" we reverse engineered the ships and are heading to the Red Planet to teach Johnny Alien a lesson...
The only problem with this event is it's outgrowing the village hall that hosts it. The trade to exhibit balance changed in the direction of trade this year but not detrimentally. I managed not to buy any kits, although the Bandi R2-D2 and R5-D4 1/12th scale kit tempted me as did a Thunderbird 4 kit. And a Robbie the robot. In the end I just bought some tools and material from Little Cars. Well, I don't really need any more kits for the cupboard...
Photos from Smallspace on Flickr
Posted by Phil Parker at 5:30 AM