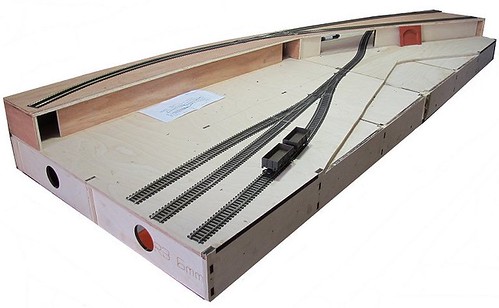 If you've watched the DVD that arrived with your copy of BRM this month, then you'll have seen me introduce our new project layouts - Ruston Quays.

After building Edgeworth last year, we've been keen to do another layout build but something the complete opposite of a rural branch line. A few plans have been bashed around - you'll get a longer run down of this in next months magazine - but this is what we've settled on. Two levels of track, urban location, canal basin. Grime. Dirt. A bit of decay. Lovely, just my sort of train set!

The name came quite late in the process. For months it's been appearing on plans as "Edgeworth 2" and in the same way it takes months to stop writing the previous years date on cheques, I'm only just automatically calling it by the right name.

Look out for updates in British Railway Modelling and even on the blog over the next few months. I'm booked in to the National Festival of Railway modelling later this year, so I better get a move on!
Posted by Phil Parker at 5:30 AM

Who's Baseboard kit are you using please
Richard Preece

White Rose Modelworks - We had a pair of baseboard kits in for a review a couple of months ago and hung on to them for this project. I've shortened both by a foot to fit the space butthey are superb kits.

Why not just call it "Chillington" and be done with it?

Joking aside, there can't be very many covered rail / canal interchange basins left - with the one at Chillington (on the BCN) seeming to get rather a lot of mentions on canal related sites - such as this:

Ruston Quays seems a perfect follow up to Edgeworth, I think a trip to peterborough may well be on the cards now. Any chance of you taking your 48DS along to run on it, (pretty please ;)

Remind me nearer the time about the 48DS and I'd be happy to bring it along.