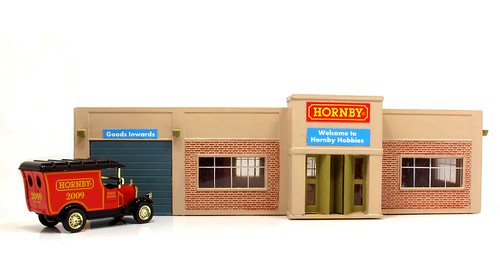 After a few finishing touched - large doors and painting the drainpipes - the Hornby building is fully renovated.

Despite it's lowly origins as a 50p buy from a second hand stall, I'm quite pleased with the results. Some early (1980s - early!) plastic kits are pretty good and repay careful building.

In fact, I'd say there is an awful lot of the Hornby accessories range from this era that are unjustifiably ignored by modellers. They are kicking around eBay and second hand stalls - grab them before people realise what they are missing out on!

You might notice that the building is empty. Well, that's part of the tribute to Margate works, which is also empty now Hornby have moved out...

An excellent rebuild. Love the signs and brick detailing. Looks like the windows need a clean.

You've got no door for despatch. Explains a lot. ;)