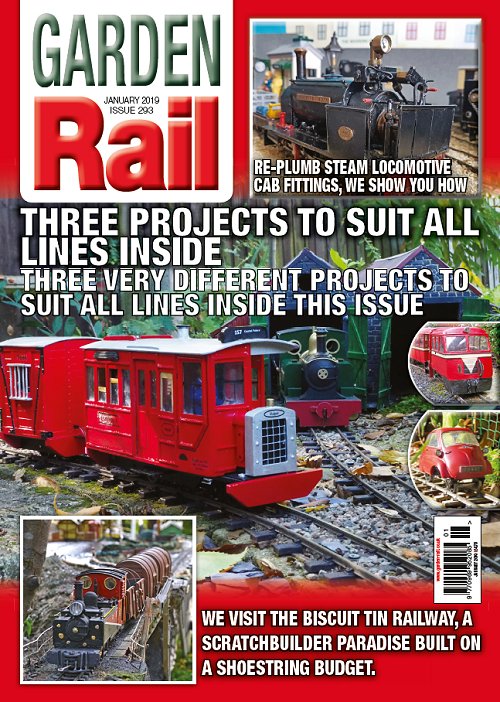 The arrival of several articles about building rail buses has allowed me to give the January issue of Garden Rail a bit of the theme. We have freelance, Isle of Man and a weird BMW conversion in the issue. I know that these short trains are always popular with modellers, so hope the readers agree.

We've also got a fair bit of recycling going on with The Biscuit Tin Railway and a Re-Recycled Railway. The former is a fascinating 10mm scale model running on 16.5mm gauge track which I was initially not sure about, but seeing it on the page am glad it's in there are the model is both fascinating and good looking.

We've some proper hard-core engineering too with re-plumbing a steam loco cab and a look at the right sort of water to ensure your locomotive enjoys a long life. As someone who is very much not an engineer, I love this stuff and it's so useful to people in a similar situation to me.
Posted by Phil Parker at 5:30 AM

I bought this issue - having built x2 layouts in 9mm/ft scale on 16.5mm track - ref the 10mm scale "Buscuit Tin Railway". I was disappointed to find that some of the text appears to be missing between (as printed) pages 19 and 20. Can the missing section please be supplied?

Thanks for bringing this up. The missing text is:

Rod has made a number of trams based on prototypes from Britain and Munich.

The question has been asked as to how Rod produces his models and where does he get his plans from? The answer is that he does not use plans – he works from photos or any other source material he can get.

For instance, Rod made a detailed model of an Indian railways NDM6 using a 16mm/ft Roundhouse Model of the same loco which he borrowed from a fellow garden railfairer. He measured the 16mm model and reduced the dimensions pro-rata. Rod’s model used the chassis from a Marklin Tram and a body made from plastic sheet. This, of course is a prototypical model but often Rod will produce a model based upon an impression of the railway itself – for instance the little DHR 0-4-0 tank Locomotive. He has used photographs for the Kalka- Shimla Railcars and scaled it accordingly.

The BTR has a range of around 50 coaches and freight wagons based upon English and Indian prototypes. The earliest were models of Corris railways coaches (now 37 years old) made from cereal packets. These are detailed, painted and varnished and are still running. The bogies are made from plastic with Romford wheels – these are later additions to improve running. The last coaches to be made are models of DHR coaches in blue livery with opening doors. Rod has also made a model of the post coach used on the Indian Hill Railway. Some of the coaches are made with working tail lamps and others carry Indian LV signs in place of the lamps.

When Rod started working in this scale he found that the only ‘people’ available in the scale 10mm/ft were from Scalextric. These however were

Where it went is a mystery, it was in the copy...