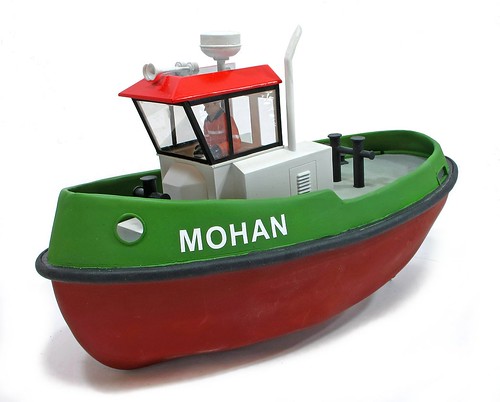 Mohan did make it to the model boat show, and not looking too  shabby.

Initial thoughts around the colour were blue, but then I realsied I'd already built a modern tugboat and painted it blue, so a nice bright green bot of Humbrol was found and sprayed over the bulwarks. Below the bumper is Halfords red oxide primer, both of which have been satin varnished.

The cabin roof was to have been flourescent yellow, but the paint wouldn't work, so I found as bright red spray can and used that instead. For some reason we have around half-a-dozen of these so it was good to use some up.

White bits are Humbrol 147 as usual and the black bits Revell number 9.

In this state, the model made it to the display and while I'm sure it didn't excite many people, I saw a couple of photos posted where it appeared, so my policy of bright paint colours paid off.
Posted by Phil Parker at 5:30 AM

I was somewhat excited about it, I like it when I run into friends models!