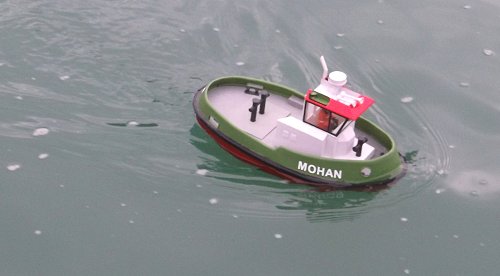 Santa brought the model boat club several thousand gallons of water for Christmas. At least the level in our lake was many inches higher than it had been only a week earlier. All that overnight rain had worked some magic.

This was good news for me as I wanted to give Mohan a proper sail before the end of the year and more water equals less bending down to launch him.

All sort of worked well at first. He moved in all the right directions, but it was obvious that additions to the superstructure resulted in more forward weight than was desirable. Add in the ability to get a bit of speed up and his nose-down attitude was alarming. Water shot through the holes in the front and we ended up with a wet deck.

Back on the bench, I pulled out one of the bags of lead shot inside and tried again. Better, but still a bit nose heavy.

Relocating half the bag (not scientific, I just poured some of the shot out into the carrying box) to behind the battery solved the problem. Even at full chat, the fender is just out of the water. Since a more sensible speed is about 3 notches on the stick, all looks good. 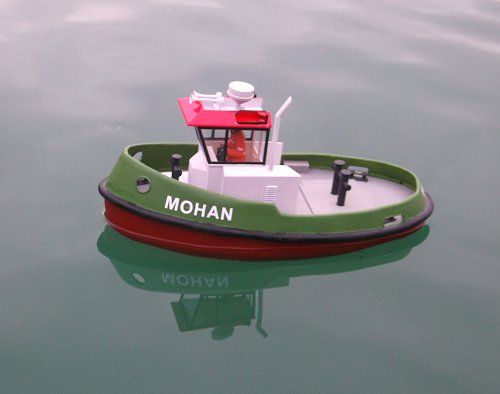 With the levels sorted, he's quite a good sail. Silent on the water (that sound deadening stuff works!) and reasonably manoeuvrable, he pottles around the water perfectly happily. When it gets a bit choppy, he bobs around like a cork, riding each wave nicely.

So, we finish the year with a reasonably succesful. There's still bodywork to do, you might notice the navigation lights are half-fitted, but he sails. I could do with a barge to tow though...
Posted by Phil Parker at 5:30 AM

Mobile marine models do some nice barge kits that go together swiftly.