Keeping the costs down 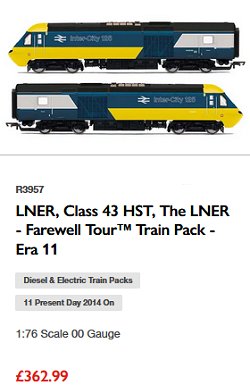 I know what you're thinking, "£362.99 for two power cars!!!!" and you'll probably head to your favourite forum to post something about model railways turning into a hobby that's only for rich people.

How rich you need to be, largely (IMHO, but as I've said before, this is my blog) depending on on how you chose to do it.

IF, your idea of railway modelling is to buy every shiny new box that appears, and stuff it in your cupboard, then, yes, this is going to be an expensive hobby. There's no way around this, manufacturers are making many, many new models every year. Since these tend to be at the hi-fi end of the spectrum, the prices are comensurate.

If you watched yesterdays video, then you'll have some idea of the commercial pressures involved. Wages are (correctly) going up in China. Shipping is getting more expensive, and we demand more and more bits stuck on to our models.

Years ago, Bachmann could knock out a single Class 40 body moulding, and it sold in huge numbers. Modellers who wanted a different version got out the etched brass and converted them. Now, the runs are smaller because every tiny variant must be catered for out of the box.

And before someone claims excessive profits, I've been around all the main players businesses, and there aren't any fancy cars outside. Our last "slap up meal" from Barwell was a delicious sausage batch from the catering van on the industrial estate. Hornby might have a cafe inside, but the place isn't that salubrious either.

Stuff costs what it costs. This said, the full-fat versions of Bachmann's Class 47 have sold out, even at £400. That's a lot of money for a single loco, but plenty of people seem happy to pay for all the bells and whistles. And hooters.

So, how do you keep the costs down?

Simple. Buy what you need.

If you are running a branch line, you don't need an APT. A couple of locos will probably do the job. Yes, you'll gradually end up with more to ring the changes, but that can happen over time.

Then, be realistic about your modelling. I doubt there are many people who can build a layout to a higher standard than any RTR loco tooled up this century. So look for stuff that works produced in the last 22 years. Worry about running rather than cosmetics. There's nothing wrong with not having the latest model. When people cry that a loco MUST be retooled to "bring it up to the current standards" on models 5 years old, I always want to see their layout as if it's that good, it must be amazing.

A 2001 loco sat on your layout might not be perfect, but I bet it looks fine with those card kit buildings. If everything is a consistant standard, the resulting model will look better than one or two standout items showing up the rest. It's a bit like chrome on a classic car - sometimes perfection just shows up the iffy paintwork.

Keeping the costs down IS possible but you can't have a full cupboard and get everything in an instant. Enjoy the modelling. Take satisfaction from something you have built or modified. That way lies happiness my little padowan.

Wholeheartedly agree. Much of the earlier stuff is almost as good and the fun lies in the upgrades and, say it quietly, personalisation. There is more satisfaction in detailing and improving the running of a Lima or 20 y o Baccy than spending 400 quid on the latest retooled version. We know how this ends: in 3-5 years there will be a better retooled version. Then how will you feel?

I simply cannot afford new stuff, so I do not buy it I specifically look for 2nd, mind you even second stuff seems to be getting more expensive these days but that could be due to the fact that because there are very few shows the only ways to sell second-hand bits and pieces seem to be a well known auction site or through a couple of the bigger retailers. Maybe once shows reappear the price will fall a bit.

Couldn't agree more. I've never added the 'detail pack' provided with a loco. Can't even see where it should fit! If a loco is intended for a display cabinet, why fit a motor? I've recently been enjoying a bunch of second-hand La France 'Ornby - makes a racket, sparks to deafen the telly and the smell - Heaven. Best Huge (Kim's Dad)

The other thing I probably should have said is that everyone focuses on locomotives, but a model railway is more this. Work on the surroundings and your model will be unique. Scenery and buildings aren't expensive - the Pendon ones cost very little, take a bit of time to build, but no-one can say they aren't the best!

I concur! Over the years I have bought very little full-price RTR, opting instead for second-hand and RTR bargains. My interest is mainly in building a model railway from parts and kits, and enjoying the process. I am not worried if I cannot match the fidelity of current RTR.

I reckon the RTR producers need to “make hay while the sun shines”, as I can see their sources of income drying up in the next ten to twenty years… Long may the skills of railway modelling continue, however!

Thanks for the post Phil, and the Shron video link. All your points are welcome. After I rediscovered the hobby through YouTube, I pretty soon concluded that typical railway modelling is far beyond my budget. So my solution is to focus on making 9"x9" "railway tiles" using a single length of 9" straight track, and I couldn't be happier. My challenge to myself is to have fun while spending the least amount of money possible .. augmented by watching the super-diverse videos on YouTube. There's so many ways to be a railway modeller. I enjoy your postings and videos. Thanks, Kev.

Is there anybody that sells RTR rolling stock that's down to the standards of the stuff I've built myself?

"Is there anybody that sells RTR rolling stock that's down to the standards of the stuff I've built myself?"

A few years ago, one online vendor acquired a reputation for selling a right load of overpriced garbage - on a strictly no-return basis. Although frequently labelled as "RARE" / "KIT BUILT" etc., his wares weren't always universally known for bearing too much resemblance to his descriptions.

Of course, if anyone dared to challenge him - or post negative feedback - he'd jump straight down their throats, demanding HUNDRED PERCENT SCORES AND GLOWING, POSITIVE FEEDBACK.

Strangely enough, I didn't do business with this gentleman ... .


Anyway, I suspect that lots of people could identify with the problem of not being able to build locos, rolling stock etc. that's as good as much of the current RTR offerings.

Of course, all the current hi-fi models come at a price - well actually a number of prices:

* Prices of most new RTR models are a lot higher than they used to be - and they're probably not about to get any lower. The reasons for this have been discussed ad nauseum in loads of places. I don't enjoy repetition.

* If you only buy new RTR, you're limited to what the manufacturers are offering (and, in some cases, what they're allowing your chosen retailers to stock). This is fine if this is what you want - but not if you want something they're "studiously refusing to make". Also, with one well known manufacturer, if your local model shop isn't in their top "tier", you might as well forget about ordering anything that isn't amongst the scraps allocated to them.

* Even if standards of some RTR have become unattainably high for a lot of DIY modelmakers, where's the satisfaction in shaking ready made products out of boxes - whatever the colour?


Of course, none of this can possibly "justify" RTR manufacturers' obstinate refusal to offer the specific model we want - at a price we're happy to pay - and complete with the satisfaction of being able to say: "I built that."

This will never do - or, to misquote Shakespeare: "A curse on both your houses!"

Well, if certain posters on some well known forum sites are to be believed, we're expected to blindly accept their "received wisdom" that there are 2 groups of villains - the blue mob and the red mob.

A guy called Erik runs the railway187 channel on youtube, and he periodically builds cardboard rolling stock kits (including locomotives) which he gets from Russia. Imagine a metcalfe kit on rails. They are the furthest thing from the RTR stock discussed above, but they look quick and fun to make. And cheap. He swaps in plastic wheels on the carriages and uses donor chassis for the locomotives. I also believe India has a home-made cardboard rolling stock culture, at least among kids. And I'm currently working on a freestyle O-scale styrene body shell to go over a $20 HO chassis.

It would assist the cottage industry 3D-printer people out there. Not sure if it would sit nice with the RTR companies or be anathema to them. If anyone has an opinion on this let me know.

Search "railway187 cardboard" if you want to see another great side of the hobby.
Kev