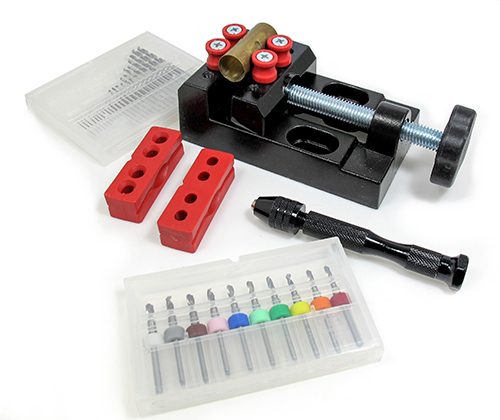 Bit of a heads up for a bargain. RMweb alerted me to a rather nice little tool set in the infamous middle isle of Lidl.

The drills look OK. Certainly better than the super-cheap multi packs you see at shows for a fiver which frequently, in my experience, don't have points on them, at leat not where the point should be.

Cost savings can be seen in the pin vice which , while nice to hold, doesn't have the nicely cast teeth of a better tool. It's OK for stuff about 1mm I would guess and possibly a little below.

I bought the set for the vice. Again, I have much better machine vice's. This one is a bit rattly and feels cheap, BUT, it has screw-in jaws for holding round objects and thus is worth the price of the set alone. It's a problem I've often faced. V-blocks are OK, but don't go small enough for some work, and I think this will be better. Or at least OK enough for me to risk the money.

Leamington's store had about a dozen of these things on the shelf, but I suspect they will go fast.

Thanks for the tip, Phil - plenty in stock at Malvern this am !

I was in Lidl earlier, but never thought to look at the centre aisle, like you, I think the vice could be handy, already owning a set of pin vices and thankfully some half decent drill bits for it