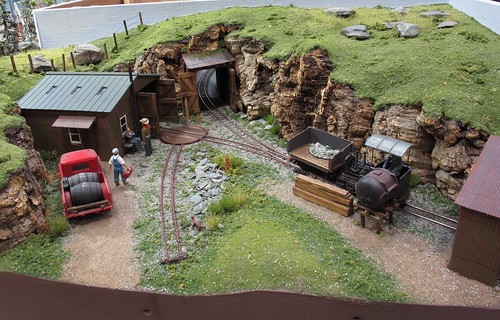 While poking my camera around at Bristol, I took this photo of the small mine on Karolina Falls. It's tucked around the side and so if the layout isn't displayed on a corner site, you won't see it.

I don't actually have a use for the photo, but I like the scene so much, I'll share it on here.

The layout is 7mm scale and most of it runs on 165mm gauge track. This bit is narrower, I didn't measure but I think 12mm, and entirely seperate. The builder assures me it will work, but there's not much point if the public can't see it!

What we have is a rather nice, and extreemly compact, layout in its own right. Perhaps a bit of inspiration for someone?

Would look good moved to Mid Wales as a gold mine, or one of the free mining operations in the Forest of Dean.