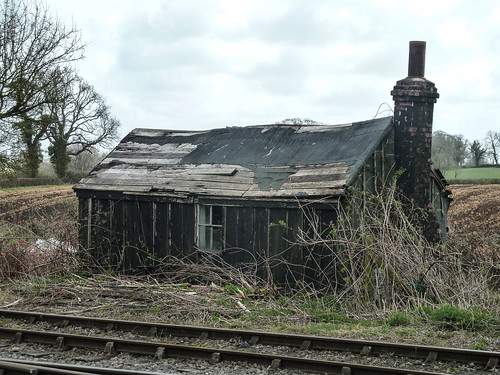 Another spot from the East Somerset Railway, the biggest platelayers hut I have ever seen.

I'm assuming it is original. No-one would build such a hut and then abandon it would they?

This begs the question why? It's opposite the station so were there a larger number of platelayers to be concealed from the travelling public?

As a modelling prospect it would be bashable from a Cooper Craft kit, but really an easy scratchbuild. Sides from Plastikard with Microstrip battens and masking tape roofing felt. The brick chimney, which must have left one end of the hut a bit cold, is another Plastikard job with a bit of tube for the pot.

On a layout, it would certainly be different.

Agree that one good shove would have it over -!- but this seems a dual purpose affair. Messing and tools one end with the stove and heavier materials at the other.
It may have end doors or access on the other side?