I was very, very busy. Seven layout shoots, a Facebook live walkaround (see above) and a promotional video filmed and edited so it could be released on Saturday morning.

That first day, where the show opens at 12:30, closing at 7pm, is an odd, and very long day. I don't think I've ever attended an event that actually opens on Friday. There were plenty of people who prefered the day though, and the hall was pleasently busy. 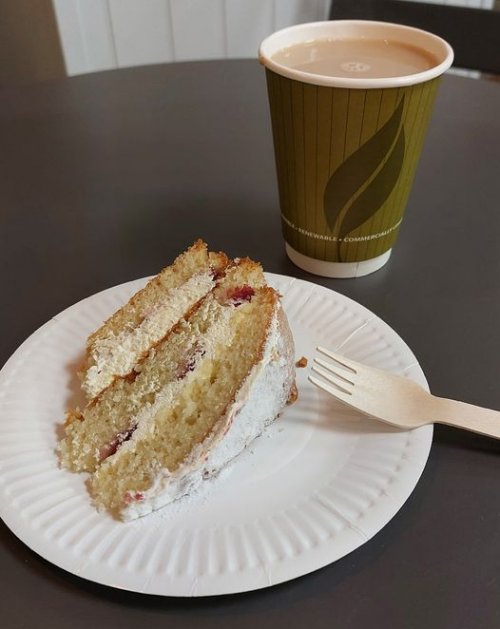 Cake news is that unlike most leisure centres, Bristol can put on a decent spread. The Victoria sponge is the best I've ever eaten. It was followed on Saturday by Vegan Lemon cake, which was OK, and Sunday's Lemon drizzle which was much better.

They also served up a good hot dog. Handy, when the hotel breakfast isn't until 8 and I wanted to be in the hall by then taking photos. These proved really popular with those inside the barriers - at least a dozen being seen to be sold on Sunday, and I'm sure there were plenty more.

Layouts ad trade were excellent. I could happily have picked up a couple more shoots if I'd had the time, and that's only because we'd already photographed several layouts for the mag in the past.

The only downside of being so busy, is that I didn't bag many photos for the blog. However, if you want more, I suggest watching Callum's excellent video which provides comprehensive coverage.

Long first day? Without mentioning venues, some exhibitions used to run a Friday afternoon to capture local workers who’d bunk off to visit as the event got warmed up plus those who took families down after tea/school/work.
Given the struggle to find welcoming and affordable venues this has become an exception now.

I remember late night shows. 2 hours waiting to get away with bored exhibitiors being the only audience.

Fridays were particularly common in the 50’s and early 60’s because of trading restrictions and bye laws that prohibited Sunday opening.

Half way through your whistle stop tour you credit me as the builder of the "Hook Basin" layout. I was mertely there to assist with operation. The layout is the work of my good friend Richard Williams.

Yes, sorry about that. It will be corrected in the magazine article.

As Richard knows I was very carefully wearing a badge that proclaimed me to be "ASSISTANT OPERATOR" in order that I neither claimed the credit nor accepted the blame.