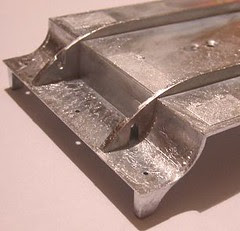 A3 footplate
Originally uploaded by Phil_Parker.

Part 2 of the “Build the Flying Scotsman” partwork.

I had said that I wasn’t going to get into this but my friendly newsagent did a hard sell on me and it is only £2.99 this time so I delved in.

This week’s part is a footplate. A single piece casting which seems pretty clean and suprisingly light. I think it’s made out of pewter rather than whitemetal. The later is unsuitable for the general public due to the high lead content in case they decide to eat rather than build with it. DJH have made a name with quality pewter castings – I have a Class 37 kit tucked away which is made of a similar looking metal.

Of course this makes the part useless to me. I can’t even cut it up and use it as wagon weights ! The chances of me ever scratchbuilding an A3 are pretty slim. Still, that’s what the bits box is for…

The magazine gave me a surprise. It recommends Modelex for your tools – run by Pat Ryan who I’ve known on the exhibition circuit for years. I hope he gets a useful boost in sales for this clever bit of marketing.

This model has generated a lot of chat on message boards across the web. I picked up a lot of on Model Boat Mayhem but have seen it on railway modelling boards and even one that is just for people in Sheffield !

Many have pointed out that you can buy a ready to run brass model from Tower that is very similar but costs less money. You have to ignore the fact the brass model needs painting to make the numbers work, unless you can wield the spray can yourself.

People have said it must be expensive because you can just go and buy a kit. True, but as I pointed out recently the numbers aren’t that much in your favour. And you don’t get the very explicit instructions and a magazine written for the people who buy those very generic railway books. This time you find out about caboose’s (is that the correct plural, cabeese perhaps ?) and the Stockton to Darlington railway. If you enjoy that sort of book I suspect the kit as a whole would be too complicated – this isn’t a criticism as everyone has to start somewhere – so this is a good starting point.

Others have criticised it just for being a part-work. The attitude is that they are all rubbish and abandon the readers half way through. I know some don’t survive but most must otherwise the publishers will go bust. The first couple of issues are loss-leaders with high advertising spends and high print runs. You’ve got to catch people very fast or you never get them. The money must come in later on when you can produce almost exactly the number of issues required.

Personally I hope it works. In a couple of years I’d love to see dozens of happy people with Flying Scotsman Locomotives at shows. Perhaps a few of them will try another kit too. It doesn’t matter, as long as they have enjoyed building their model then that is a good thing.

Anyway, I definitly won't be building this model, so go and visit someone who is.

Sorry, long since cleared away. eBay or even the publisher might be able to help. Good luck.