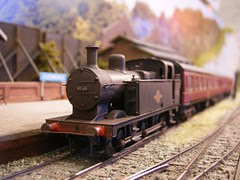 Jinty on Flockburgh
Originally uploaded by Phil_Parker.
St Albans was the show where my newly built Jinty was due to get its first proper testing. It doesn’t matter how many miles are put in on the rolling road, plonk it on the track in front of an audience and you see a whole new side to the model.

Anyway, on Friday once we’d set up I ran the locomotive around the entire layout to test we had power in all the track. This went OK so I decided to try it again on Saturday morning. The very slight occasional stutter I put down to needing running in. There was plenty of time before the public swarmed in so another run and things looked good – right up until the con rod fell off one of the front wheels.

Finding a tiny nut on a layout covered in nylon grass. It’s effective both as a representation of ground cover and hiding small bits of metal. 5 minutes later we got lucky and I replaced the offending item. A smear of superglue across the top fixed it in place and glued the rod up.

With the glue not fully hardened I removed the nut with pliers and desperation, cleaned it all up and smeared WD40 everywhere I didn’t want glue. The rod, nut & washer went back on and the model was tested. Great, the wheels rotated 4/5th of the way round and then jammed with the compensation at a funny angle. I gave up at this point as we were nearly open.

Later that day with the locomotive upside down in a cradle I spotted the problem – the front steps had bent and hit the rods, stopping them rotating all the way. Bending it back cured the problem.

The Jinty ran around the railway nicely now but still had the occasional stutter and trip off the track. Looking at ground level the problem was obvious. A bright spark told me that the guard irons were fractionally too long and clipped the rails on crossovers.

What I should have done was bent them out of the way, what I did was clip them back half a millimetre or so. Result, a nice running railway loco. A morning spent on the passenger train (my running in turn) was followed by full service shunting goods.

Now it’s in the box and I’m looking for my next project.
Posted by Phil Parker at 6:53 PM