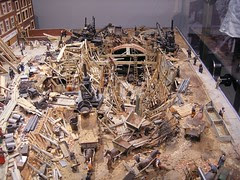 Cut and cover model
Originally uploaded by Phil_Parker.
A trip to London for work today saw me with some spare time after my meeting. Now, I could have rushed back on the train to put in 20 minutes at my desk – but as they owe me some time, I decided to go and have a look at the newly re-opened London Transport Museum.

The museum itself is pricey (8 quid entry fee !) but nicely laid out with clear and interesting information. The vehicles are accessible and even for the enthusiast the captions aren’t patronising. The clever thing is that there is something for everyone. Water traffic gets a look in as well as the usual tram, tube and bus stuff. Even taxis make an appearance to give a rounded picture. There is enough “proper” museum to satisfy with just a few pointless gizmos thought up by Marketing to show we have a 21st century exhibition space.

One hint – go when the schools aren’t on holiday. I had a reasonably quiet walk around sharing the experience with only a few tourists. There are lots of child friendly activities but I suspect a big group of ankle-biters would get very annoying very quickly.

Anyway, the photos shows a truly breathtaking model of cut-and-cover tube construction. The scale appears to be 7mm:1foot. Click on the photo to see a larger version in Flickr – the thumbnail really doesn’t do justice to the sheer level of detail exhibited. I’d suspect that the scene has been compressed a little but not much. I have seen this sort of thing in photographs of the period and it looks accurate.

I loved the spoil carts lined up and ready to haul the earth away, all the wood shuttering keeping the hole er, whole and a very nice little boiler in the corner that would look lovely on the back of a wagon on my hospital railway.

You really get an impression of the chaos that surrounded this sort of work. I can well understand by contemporary accounts described how people didn’t look forward to the arrival of the railway. I doubt anyone would put up with it nowadays !
Posted by Phil Parker at 9:27 PM