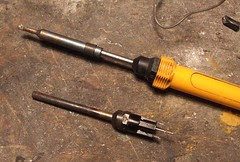 Antex soldering iron
Originally uploaded by Phil_Parker.
While I probably pack too many tools when I go to an exhibition, there are some that I definitely wouldn’t go without. In fact if I realised that I’d forgotten to pack them, a quick u-turn would be executed to go back and get them.

One such tool is my soldering iron. It’s an Antex 25W model which I have customised (“pimped” for the MTV generation) with a 8ft long power lead. This allows its use on the layout whilst plugged in to a 4-way block on the floor. It’s amazing how much difference this makes when you struggle to re-solder a switch blade to a tiebar in front of a crowd impatient to see trains run again. No need to find a way to get the socket on to the layout or supporting it as it dangles in mid-air !

However, nothing lasts forever and my iron packed up. But as I can’t bear to throw things away when they can be fixed I ordered a replacement element for 12 quid from Squires and carefully disassembled the iron to replace it.

Really all I have left of the iron I once bought after this is a handle and couple of screws but it’s still cheaper than buying a new one and so much more environmentally friendly.

A second iron is required for the fix as you have to unsolder the wires from the old element and solder the new one in. A matter of minutes work but a show stopper if you are fixing the only soldering device you have.

After carefully putting everything back together a quick test showed all was well and the tool can return to the exhibition box to resume its travels around the country. Soldering irons are pretty simple tools – just an element in the end of a lead really. There are only two screws to undo to release the lead and three soldered connections. It just goes to show, the simplest ideas are the best.
Posted by Phil Parker at 7:07 PM

Hello.
How can I replace the heating element and power lead in XS25 iron? How to disassemble this iron?

Sorry, I don't have an XS25 iron to look at to answer this. However I would recoment that you check the price of the replacement part as it might not be much less than a whole new iron.

Nice blog and nice information which shared by the blog owner I want to say thanks to this blog owner. I would like to come again on this blog. soldering wire suppliers
in India

I have a couple of old Antexes- an 18W and a 25W. I found that the price of the tips was astronomical so had a scout around for something that I could adapt. I took a punt on a bag of 10 assorted from China for a couple of Aussie $. I think they were intended for Hakko irons.

These arrived OK and I opened out the hole in the least useful one as an experiment. I recall that it was 4 mm and I opened it to 4.5 for the Antex. It slipped on the iron and works as well as an original. The tips seem to be made of iron-plated steel not copper but it makes no noticeable difference. They have a thin steel 'liner' in the hole which came out with the drill. I intend to make a copper adaptor that fits this sleeve exactly, with a clamp grub screw, and the body of which is split like the Antex tip with spring clip to fit the iron. I can then use the rest of the tips easily (I also have a Pace MBT but the Antexes are more portable!)
Regards, Bob Cat