I made a car park 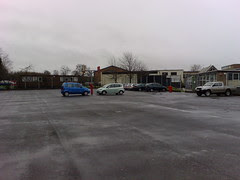 19012008094
Originally uploaded by Phil_Parker.
Ok, it’s not the sort of thing I normally write about but this photo shows the only thing I set up today. A car park at our exhibition.

Now you might say that this just looks like some cars sat in a school playground, which in essence is what it is, but the important thing is where they are parked. The playground is lamentably lacking in lines indicating parking bays so either you let visitors to the show work it out for themselves or you tell people where to go and arrange them in nice neat lines. Those cars next to the netball hoop aren’t there by chance you know, that’s the start of the middle row.

The former method results in about ten cars parked and large numbers turned away at the gate. The later involves a little pre-planning and lets you get a hundred or so vehicles into the space. Admittedly some people aren’t happy such as the guy who was asked to move his car nearer another and moaned, ”I don’t want to hit his door with mine”. As they were only just in the same postcode to do this he’d need to unbolt his door and carry it across the gap so I suggested he might be able to get a little closer without risk.

Another thing that fascinates me is the number of people who ask what time the show opens (10am) and then ask if it’s possible to get in before this. Call me a pedant but that is what “opening time” means – it’s when we open. If you can get in earlier, then opening time is earlier. Simple really.

Finally, I’d like to award a prize for the first person out of the door – 10.35am. He left after little more than half an hour clutching a bag of stuff from the second-hand stall, presumably happy with his visit. I can’t help feeling he missed out though, there are some nice layouts to look at too and with the state of the weather it wasn’t like the garden was calling out for attention.
Posted by Phil Parker at 5:16 PM