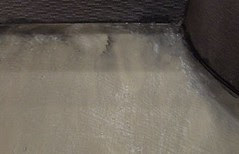 water stage 1
Originally uploaded by Phil_Parker.
Model water has (apparently) been the source of problems for many years. If you want to create a static version of a fast flowing river then it’s true, you are stuffed, as it’s never really going to look right. OK, I know people have had a go at this and in photos sometimes it doesn’t look too bad, but waters’ one of those things that really needs to move as it’s not the water itself that eye sees but the movement of foam and ripples.

Anyway, the trick as far as I’m concerned the trick is to pick static water or at least the stuff that isn’t moving much. Handily, this is exactly what I’m working on for Flockburgh’s quayside.

Now I have been here before. There is nice static water on Melbridge Dock that has fooled people for years. We often get finger marks as visitors touch it expecting to get wet !

Stage 1 is to smooth the baseboard. I’ve used Polyfiller as there was some handy in the garage but I’m sure any similar filler will do.

Next, paint the surface with a Humbrol chocolate brown enamel paint. Not sure if it has to be enamel but that’s what I’ve used.

When this is dry, wash over with very thinned down black. Streak it out from the quayside in random fashion. This gave me the effect as seen in the photo. Check back tomorrow for the finishing touches.
Posted by Phil Parker at 7:05 PM