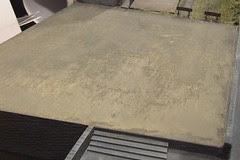 ochre painted
Originally uploaded by Phil_Parker.
So I start on the dockside with a wash of greyish paint. Not a particularly dark grey but blacker than a mid grey. This was brushed over the ochre liberally and left to dry. There were problems getting it to stick to the area I had spilt PVA on – you can see it in the last picture as a darker blob – but working it in seemed to help.

The result was, erm, different. The grey was too dark and the result too patchy. I’d hoped the well watered down paint would gently tint the base coat. Instead I had pools of colour. Some looked OK if I squinted but there was too much contrast between the colours.

Soooo I tried to sand it off with some very fine paper. Not back to the bare wood but just trying to take the grey off or at least reduce its effect. This went very well actually, I was much happier with the effect.

I still needed to get some more colour in so I mixed a watery brown/grey mix and brushed it in well. The colour looked good but I think the older coats lifted and I found I was swashing around quite a thick mix. Worse I was leaving brush marks.

Desperation set in and I tried patting the paint with a wet kitchen towel. To start with this looked a bit regular too but with more water and random patting I thought I might be getting there. At this point I decided to give up and let it dry.

The result looks OK I think. With the buildings on top it is even better. The problem is that I want a surface people ignore so if you ever see the layout at a show, please pretend not to see this bit.
Posted by Phil Parker at 6:43 PM