9F behind the bar 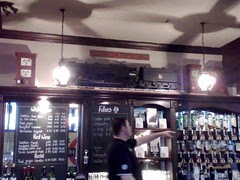 9F behind the bar
Originally uploaded by Phil_Parker

DOGA AGM time. I packed up my competition entries and headed down to sunny London. After picking up this years bit of card to act as a background for the photos from Housemans bookshop, and then counteracting all that leftie goodness with a McDogBurger, it was off to The Model Railway Club.

Before the meeting proper we had a weathering demo from D&P Models. Watching someone merrily airbrushing acrylics over nice new RTR locos whilst explaining what he was doing and why. In around 20 minutes the models looked a whole lot more realistic and even I'd learnt something, and I've always been happy with my weathering techniques !

Next up the competition judging took place with those present voting on their favorite models in each class. We had a good turn out with 27 different models entered. The quality was very high again.

Finally the official business took around an hour. I was the Chairman's stunt double - he was unable to attend due to collecting his daughter from university in Sheffield. Personally, I think he should have explained that there is a perfectly good railway line from there and then turned up at the AGM but apparently that's because I'm not a soft hearted parent...

The competition results were announced, I managed a second place in the kit built locomotives category. The winner had built a beautiful 0-4-2 using a Jidenco kit and fully deserved his victory. Simply putting one of those together deserves a medal as they don't have the best reputation in the world !

After the even a few of us repaired to the Doric Arch pub at Euston station. Top quality beer as sensible (for London) prices. The walls are decorated with real railway ephemera and behind the bar is a 3 1/2 inch gauge 9F. This is a whole lot more interesting than the farm implements nailed to the walls of most "character" pubs. I wonder if the landlord was a big customer at the nearby Collectors Corner when it was open years ago ?

You can see pictures of the entries to the modelling competition here.