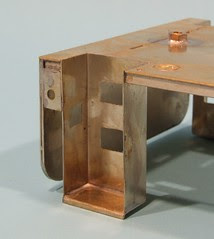 The trouble with looking at prototype locomotive photos is that you find more work. At the front of this Ruston as some nice, inset steps. Entirely different from those provided in the kit. Yippee.

The photos were quite clear on the design, but a hard to work out precise dimensions from. Again, I went for something that looks right compared to the rest of the loco. The buffer beam for example gives a pretty good idea of depth. The width is shown by the spacing between sandbox filler and front. Then all (!) I had t0 do was draw the holes to be cut on some metal. Time was saved by soldering the two sheets of nickel silver together once the vertical fold lines had been scribed heavily with a skrawker.

A bit more cutting and filling later I had a pair of U shapes with step holes. Some more nickel at the bottom with a small lip strengthened it all up. Then the footplate hole was cut and the steps fitted. Ideally I'd have soldered them to the underside and then cut the top but again, the pictures showed the top edge of the steps poking up so I had to replicate this as well.

Hopefully the rest of the model will be similar to the kit. Why can't prototype loco owners leave things alone ?
Posted by Phil Parker at 5:55 AM